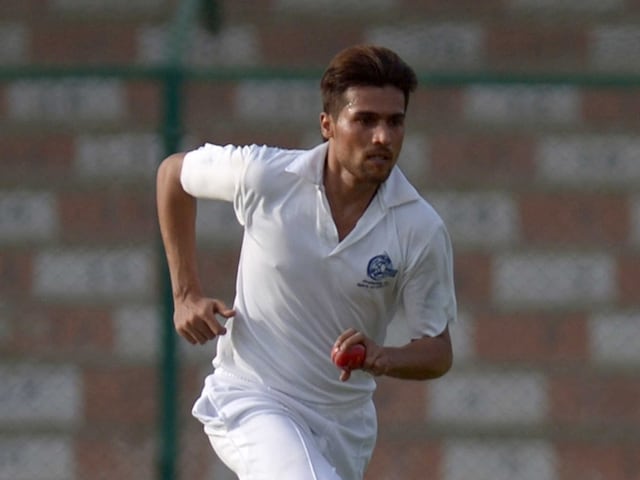 Mohammad Amir has been warned of 'bad situations' during Pakistan's tour of England.© AFP

Marcus Trescothick warned England's batsmen to expect a tough time in the middle facing Mohammad Amir after he became the Pakistani's maiden first-class wicket on English soil in six years on Monday.

Former spot-fixer Amir took three for 36 in 11 overs in Pakistan's opening match of their England tour against Somerset at Taunton.

Somerset slumped to 128 all out in reply to Pakistan's first innings 359 for eight declared -- a deficit of 231 runs.

Pakistan captain Misbah-ul-Haq opted against enforcing the follow-on and at stumps, on the second day of three, the tourists were 140 for four for in their second innings -- a huge lead of 371 runs.

Amir's exciting career came to a shuddering halt during a Lord's Test in 2010 when he and new-ball partner Mohammad Asif were caught bowling no-balls to order on the instructions of captain Salman Butt as part of a tabloid newspaper sting operation.

All three received five-year bans from cricket and together with sports agent Mazhar Majeed, jail terms.

Amir, who served three months in an English young offenders institute, has only featured in the game's shorter formats since his return to Pakistan duty in January.

But the 24-year-old is now back in England and could make his Test return in the first of a four-match series at Lord's on July 14.

The floppy hair he had as a teenager may have been replaced by a shorter haircut and a goatee beard, but the whippy action that made Amir one of cricket's hottest properties was still on show at south-west county Somerset's headquarters ground.

After Pakistan had declared on Monday morning following a century by Younis Khan, Amir took the new ball.

But Amir struck with his 14th ball back in first-class cricket on English soil.

Left-hander Trescothick, on eight, could only edge a superb outswinger that moved late and wicket-keeper Sarfraz Ahmed held an excellent diving catch.

Amir had another wicket when a full-length inswinger bowled first-class debutant Adam Hose (10).

And eight minutes after lunch, Amir bowled Peter Trego (23) with another fine inswinger that knocked over the batsman's middle stump and left the other two standing.

"He bowled very well," said the 40-year-old Trescothick, whose nine-balls faced on Monday were all bowled by Amir, after stumps.

"He swung the ball really late, that's the biggest thing we noticed.

"You get a lot of bowlers who swing it quite early but he (Amir) was swinging it late and as it was coming down the pitch you were almost guessing whether it was an inswinger or whether it was one of the straight ones," the Somerset stalwart explained.

Trescothick was in no doubt that, on this form, Amir could threaten England's current top order.

"On that performance yes he will cause problems for England.

"He got Adam Hose with a good inswinger round the wicket and Pete Trego got an absolute beauty.

"That bit of extra pace is the thing. He hasn't played international cricket for a number of years so there's probably an extra bit of zip that he has that makes him hard work."

Despite suggestions from England captain Alastair Cook that spectators might jeer Amir, there was nothing but polite applause as he came on to bowl in Taunton.

"I don't think you'd expect anything else," said Trescothick.

"We get on and play the game and it is what it is."

Meanwhile Pakistan opener Shan Masood said of Amir: "He hasn't lost it. If anything, he's just got better."

England swept aside Sri Lanka 2-0 in a three-match Test series and have an impressive home record.

"We have to respect England, how good they are ... but we're up for it," insisted Masood.

"We're ready to come to England and give them a good match."

Comments
Topics mentioned in this article
Pakistan Cricket Team England Cricket Team Mohammad Amir Marcus Trescothick Cricket
Get the latest Cricket news, check out the India cricket schedule, Cricket live score . Like us on Facebook or follow us on Twitter for more sports updates. You can also download the NDTV Cricket app for Android or iOS.