Richie Richardson said he supported players making the most of financial opportunities but said commitment to country needed to supersede all else. 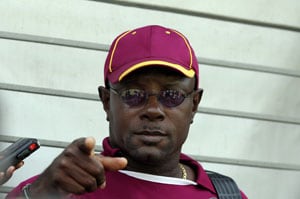 Richie Richardson is the current team manager of West Indies

The former Windies captain and outstanding batsman said he supported players making the most of financial opportunities but said commitment to country needed to supersede all else, reports CMC.

"I understand players wanting the opportunity to go and play cricket elsewhere and I support that. I want players to be comfortable and make as much money as possible," the Jamaica Gleaner newspaper quoted Richardson as saying.

He was speaking against the backdrop of off-spinner Sunil Narine's controversial omission for the upcoming three-Test series against New Zealand starting at Sabina Park here Sunday.

Narine opted to remain with Kolkata Knight Riders for the June 1 Indian Premier League (IPL) final, missing the stipulated deadline for his return to join the West Indies preparation camp in Barbados. He was ruled ineligible for selection for the Test series but is free to play in the Twenty20 series which follows.

"Rules and regulations are there. The players signed a retainer contract with the West Indies Cricket Board, making a commitment to West Indies cricket," Richardson pointed out.

"At the end of the day, if it was not for West Indies cricket none of us would have been here."

However, Richardson said that to avoid such conflicts in the future, decisions needed to be made in order to create a definitive window in the international calendar for the IPL.

"This would ensure that there are no conflicts where the players are concerned."