Mahendra Singh Dhoni And Team Helped me to Calm my Nerves: Pawan Negi

Mahendra Singh Dhoni gave the ball to Pawa Negi in the 13th over. The all-rounder started off poorly but then picked up his first Twenty20 international wicket with his fifth ball. 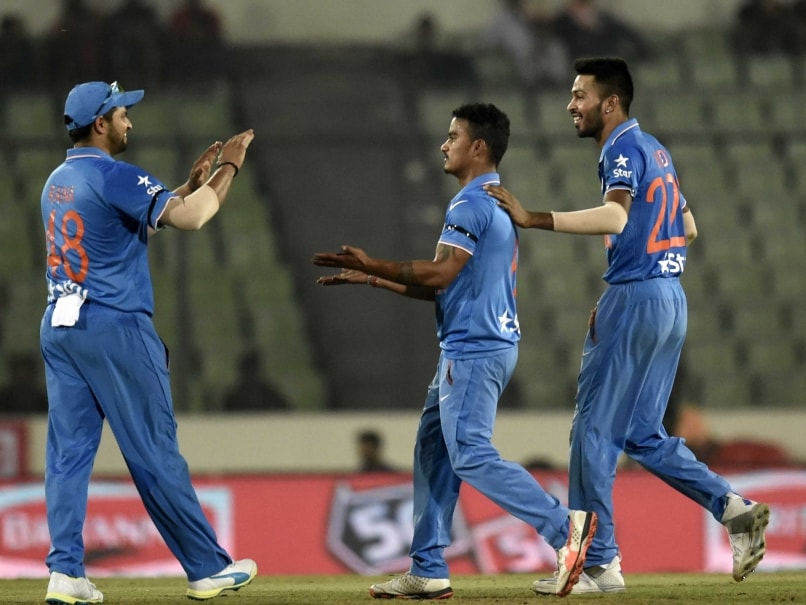 India all-rounder Pawan Negi said emotions were getting the better of him before senior players such as skipper Mahendra Singh Dhoni stepped in with their calming words during his debut against United Arab Emirates in the Asia Cup Twenty20 tournament. (Negi Off to Dream Debut, Picks Wicket in His First Over)

Negi made his debut against the UAE on Thursday night and grabbed one wicket. (Asia Cup: Rohit Sharma, Bhuvneshwar Kumar Star in India's Emphatic Win Over UAE)

"I got to know that I will be making my debut in the afternoon. Our bowling coach Bharat Arun told me that I will be playing this game. I felt really great when I heard that news," he told BCCI.TV.

"It felt normal when we were in our team meeting and then boarded the bus for the stadium. But just when we reached close to the ground, I had a bit of butterflies in my stomach.

"I was about to play my first game and there were a flurry of emotions as I walked into the dressing room."

"When Ravi (Shastri) sir gave me the cap and I wore it, it felt really great. All the players came up to me to congratulate and that moment felt really special," he said.

Negi said the team helped him calm his nerves.

"The seniors in the side really helped me to calm my nerves and they came up to me to boost my confidence levels.

The entire team was really supportive and I never felt like I was playing my first match," he said.

"Before walking out to the field, our captain MS Dhoni walked up to me and asked me not to think too much about the fact that I was making my debut. He asked me to relax and treat the game as a normal game and go about things normally."

The 23-year-old was handed the ball in the 13th over of the match against UAE last night and didn't disappoint as he picked his first international wicket with his fifth delivery.

"Before the start of the match, Harbhajan Singh came up to me and spoke about the pitch. He said that the pitch is dry and if I bowled with a little flight, I would be able to turn the ball. I tried to do just that.

"When I took that ball in my hand, my complete focus was to pitch the ball in the right areas and bowl wicket to wicket. But, my nervousness got the better of me and I leaked runs.

"But once I got a wicket, I got a lot of confidence. MS Dhoni came up to me and told me that I was bowling under pressure. He asked me to loosen up and bowl freely. That really boosted my confidence. A wicket on debut is huge for anyone and I felt really great."

Negi said he will be looking to take a lot of confidence from his first game for India.

"I speak a lot about bowling during our practice sessions with our lead spinners - R Ashwin and Harbhajan Singh. They both are very supportive. Suresh Raina also supports me off the field. I also keep talking to our captain during our nets session with regards to my batting. I feel I have gained a lot of confidence after playing my first match. I will remember this moment for a long time."

Comments
Topics mentioned in this article
India Cricket Team United Arab Emirates MS Dhoni Pawan Negi Cricket
Get the latest updates on ICC T20 Worldcup 2022 and CWG 2022 check out the Schedule, Live Score and Medals Tally. Like us on Facebook or follow us on Twitter for more sports updates. You can also download the NDTV Cricket app for Android or iOS.