Left on the sidelines, Gautam Gambhir off to Essex 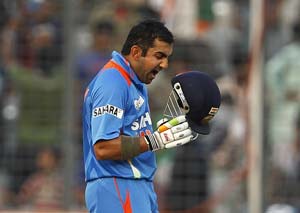 In an effort to keep in touch with competitive cricket, Gautam Gambhir has signed up for Essex for the remainder of the County season. The left-handed opener, who played his last game for India, an ODI against England at Dharamsala on January 27 this year, is replacing New Zealand's Hamish Rutherford as the County's overseas recruit.

"We are delighted with the signing of Gautam Gambhir who is a player with pedigree, which has been showcased on the biggest stages in cricket," Paul Grayson, the Essex head coach, said. "He will no doubt bring his experience to the squad during an important stage of the season for us in the LV County Championship and Yorkshire Bank 40 competition."

Gambhir has been languishing in the sidelines after being ignored for the home Tests against Australia. He was not picked for the Champions Trophy and the tri-series in the West Indies. He has played 54 Tests for India and scored 4021 runs at an average of 44.18. Gambhir is the first Indian to sign for a County this season. In 2012, Harbhajan Singh represented Essex for the second half of the season.

Comments
Topics mentioned in this article
Cricket Brendon McCullum James Franklin Danish Kaneria Lonwabo Tsotsobe Bradley Watling Gautam Gambhir Hamish Rutherford Jeetan Patel England Cricket Team
Get the latest updates on IPL Auction 2023 and check out  IPL 2023 and Live Cricket Score. Like us on Facebook or follow us on Twitter for more sports updates. You can also download the NDTV Cricket app for Android or iOS.