Kirk Edwards gets West Indies recall for Tests against India

A spokesman for the West Indies Cricket Board said that the participation of left-arm fast bowler Sheldon Cottrell is subject to him being passed as fit by the WICB's medical panel. 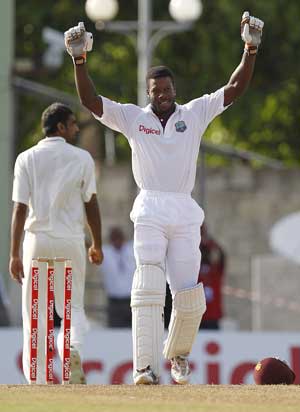 Darren Sammy will lead the West Indies in the two-Test series in India next month.

The West Indies Cricket Board (WICB) has announced a 15-man squad for the series, starting with the first Test Nov 6. The second Test will be played from Nov 14-18, reports CMC.

The West Indians will begin the tour Oct 27 with a three-day warm-up match. They will also play three One-Day Internationals (ODI) Nov 21, Nov 24 and Nov 27 but the venues are yet to be decided.

Though the Indian cricket board has not announced the Test venues, Kolkata and Mumbai are the most likely host the two Tests.

Both centres want to hold the second Test, which will be the 200th Test for Sachin Tendulkar, and Mumbai being his home town might get the nod.

Tendulkar has played 30 matches more than the second-placed Ricky Ponting and Steve Waugh, both now retired.

By squeezing in the West Indies series, India's tour of South Africa, which was to start with a tour game Nov 18, will have to be rescheduled cutting down on the number of matches.

With the West Indies coming here soon after India's ODI series against the Australians and stay till the last week of November, the tour to South Africa may not kick off till the end of the month.

The South Africa tour, which was to include two T20s, seven ODIs and three Tests, ending on January 19, will now have to be shortened as the Indians have to start their tour of New Zealand on Jan 19.

Following the India tour, West Indies will also be going to New Zealand to play three Tests and five One-Day Internationals and two T20s between December 3 and January 15.

Comments
Topics mentioned in this article
Cricket India Cricket Team West Indies Cricket Team Darren Sammy Ishant Sharma Kirk Edwards Sheldon Cottrell
Get the latest updates on ICC T20 Worldcup 2022 and CWG 2022 check out the Schedule, Live Score and Medals Tally. Like us on Facebook or follow us on Twitter for more sports updates. You can also download the NDTV Cricket app for Android or iOS.