England were 74 for one in their second innings, a lead of 252 runs at stumps on a gloomy third day. 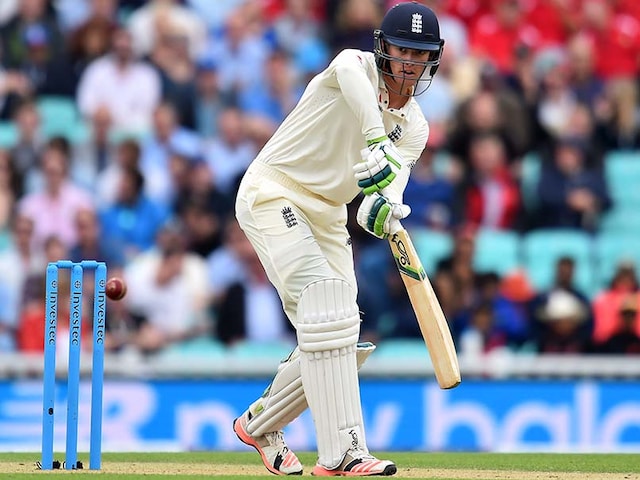 Keaton Jennings plays a shot on Day 3 of the 3rd Test between England and South Africa.© AFP

Keaton Jennings survived a couple of scares against his native South Africa as England maintained their grip on the third Test at The Oval on Saturday. England were 74 for one in their second innings, a lead of 252 runs at stumps on a gloomy third day where rain meant only 32 overs out of scheduled 98 were bowled. Jennings was 34 not out and Tom Westley, one of three debutants in England's XI, unbeaten on 28 in what is the 100th Test at The Oval.

Johannesburg born and raised Jennings, the 11th man tried as an England Test opener alongside Alastair Cook since Andrew Strauss retired in 2012, was under pressure for his place after a run of low scores -- including a duck in the first innings of this match.

The 25-year-old Durham left-hander, England-qualified through his mother and by residence, nearly fell cheaply again to another slip catch by Dean Elgar off Vernon Philander only for an edge on six to be dropped on this occasion.

His innings was the cornerstone of the Proteas' 175 all out.

That left then 178 runs behind England's first innings 353, which featured Ben Stokes's 112 and former captain Cook's 88.

Toby Roland-Jones, who'd removed all of South Africa's top four in a sensational debut display on Friday, had Bavuma caught behind to end the innings.

Middlesex seamer Roland-Jones finished with figures of five for 57 in 16.4 overs.

In the process he became just the sixth England cricketer, and first since Graham Onions in 2009, to take five or more wickets in a debut Test bowling innings.

South Africa resumed on 126 for eight, still 28 runs shy of avoiding the follow-on.

Bavuma was 34 not out and Morne Morkel unbeaten on two, with this four-match series in the balance at 1-1 and the continued overcast conditions again favouring the faster bowlers.

- Philander returns -
South Africa were bolstered by knowing Philander had been passed fit after a night on a hospital drip that followed a second day's play from which the all-rounder was largely absent.

The diminutive Bavuma had a reprieve on 40 when an edged drive off Stuart Broad flew low to gully where a diving Stokes could not hold what would have been a stunning catch.

Bavuma subsequently ensured South Africa avoided the follow-on by driving a Broad half-volley through the covers for four.

And he then produced an even better cover-driven four off James Anderson, with England's record Test wicket-taker hit on the up.

But a valuable ninth-wicket partnership of 47 ended when Morkel (17) nicked Anderson to Cook at first slip.

Bavuma's edge to the third man boundary off Roland-Jones saw him complete a hard-earned fifty off 111 balls, including eight fours.

The worth of his more than three-hour innings was acknowledged by South Africa captain Faf du Plessis, who led the applause from the dressing room balcony.

But Bavuma was out soon afterwards, edging a good length Roland-Jones ball to wicket-keeper Jonny Bairstow.

England lost Cook shortly after lunch when he was bowled by an excellent delivery from fast bowler Morkel for just seven.

Westley, a longstanding team-mate of Cook at county side Essex, twice drove Philander for four and cover-drove Morkel for another boundary as he followed his first-innings 25 with another promising effort.

Left-hander Jennings, who again risked bringing the slips into play by several times defending with an angled bat, was on 33 when given out lbw to fast bowler Kagiso Rabada.

But his review of umpire Joel Wilson's decision showed the ball had pitched just outside the leg stump.

Comments
Topics mentioned in this article
England Cricket Team South Africa Cricket Team Cricket
Get the latest updates on IPL 2020, check out the IPL Schedule for 2020 and Indian Premier League (IPL) Cricket live score . Like us on Facebook or follow us on Twitter for more sports updates. You can also download the NDTV Cricket app for Android or iOS.