India discard Kaif was the lone Uttar Pradesh to shine on a day when most of the other front-line batsmen struggled to get going. 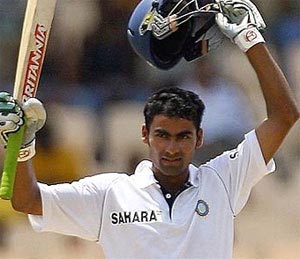 Karnataka debutant Hosagivappa Sharath claimed five wickets, including that of Suresh Raina, before Mohammad Kaif bailed Uttar Pradesh out of trouble with an unbeaten century on the first day of their Group B Ranji Trophy match on Saturday.

Besides the left-handed Raina, the 19-year-old medium pacer sent back opener Ali Murtuza, and middle-order batsmen Parvinder Singh and Arish Alam after his team chose to field at the Bhamashah Stadium. He had figures of five for 44.

K P Appana picked up two wickets while there was one for Stuart Binny as Uttar Pradesh finished the day at 245 for eight in 82 overs.

India discard Kaif was the lone Uttar Pradesh to shine on a day when most of the other front-line batsmen struggled to get going.

Kaif remained unbeaten on 105 when stumps were drawn, while Imtiaz Ahmed was yet to open his account.

Kaif hit nine fours and a six during his 217-ball knock, and got support from Bhuvneshwar Kumar (36), Alam (27) and Piyush Chawla who scored 23.

Sent into bat, the hosts were in trouble straightaway losing Murtaza for a team score of seven, and were reeling at 40 for four by the 16th over.

Kaif and Alam stemmed the slide with a half-century stand before Uttar Pradesh lost three more wickets, which handed the advantage to the visitors.

But an 83-run partnership for the eight wicket between Kaif and Kumar helped the hosts stage another fightback.

Comments
Topics mentioned in this article
Cricket Mohammad Kaif UP KAR Vikram Solanki Virat Kohli Wasim Jaffer Irfan Pathan Paul Valthaty
Get the latest Cricket news, check out the India cricket schedule, Cricket live score . Like us on Facebook or follow us on Twitter for more sports updates. You can also download the NDTV Cricket app for Android or iOS.