Kareena Kapoor was in Melbourne to unveil the 2020 ICC T20 World Cup trophies for the men's and women's tournaments. 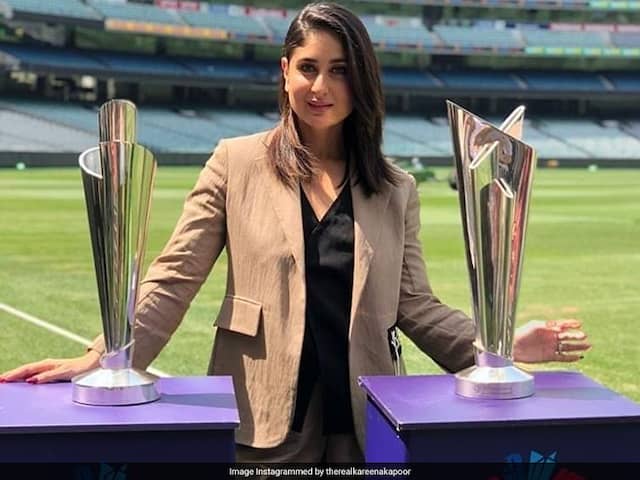 Bollywood actor Kareena Kapoor unveiled the ICC World Cup trophies for the men's and women's tournament at the Melbourne Cricket Ground (MCG) on Friday. The 2020 ICC Women's World Cup is slated to get underway from February 21 with Australia hosting India in the inaugural fixture. The men's event will begin from October 19 with Bangladesh taking on a yet-to-qualify team. "Bollywood (star) Kareena Kapoor is counting down to the @ICC Women's #T20WorldCup. Who's joining her to fill the @MCG for the final on International Women's Day?," the T20 World Cup tweeted along with a picture of Kareena Kapoor posing with the trophy.

Bollywood Kareena Kapoor is counting down to the @ICC Women's #T20WorldCup. Who's joining her to fill the @MCG for the final on International Women's Day? pic.twitter.com/poPocG1Kl9

Bangladesh and Thailand booked their places for the Women's T20 World Cup via the qualifying event. They will join the top eight teams -- Australia, England, India, New Zealand, Pakistan, South Africa, Sri Lanka and the West Indies -- in the 10-team tournament.

Bangladesh have been placed in Group A for the upcoming World Cup along with defending champions Australia, India, New Zealand, and Sri Lanka.

Thailand are placed in Group B along with England, South Africa, West Indies, and Pakistan.

The eight top-ranked teams based on finishing positions from the last ICC T20 World Cup in the West Indies in 2018, automatically qualified for the tournament, as fixtures involving those teams were announced in January this year.