Jos Buttler hit the most sixes in an ODI innings for England with 12 as he went from 51 to his hundred in 15 balls. 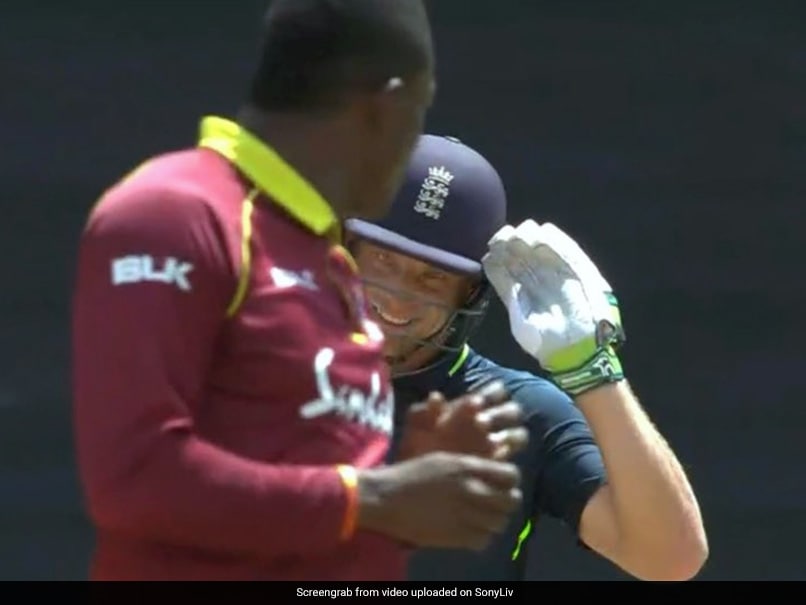 Jos Buttler brought up his highest ODI score of 150 off just 77 balls.© Screengrab

Jos Buttler sent cricket fans on Twitter into a frenzy when he trolled Sheldon Cottrell with a salute on the way to a record-breaking innings against the Windies on Wednesday. Buttler brought up his highest One-day international (ODI) score of 150 off just 77 balls with 12 sixes and 13 fours while captain Eoin Morgan also made 103. The pair shared a brutal partnership of 204 from 124 deliveries which took England to their third-highest ODI total with 154 runs coming in the final 10 overs alone. However, the most entertaining moment of the match came when Buttler sent a ball from Cottrell over the ropes and responded with the bowler's trademark salute.

That Jos Buttler salute. Inject me.

Jos Buttler we salute you never mind you trolling the bowler ?? what a knock!

Jos Buttler's salute might be my favourite bit of this game ??#WIvsENG

Buttler inspired England to 418/6 but did eventually get bowled by Carlos Brathwaite.

During the fourth ODI between the Windies and England, 46 sixes were hit, the most in an ODI.

England hit a record 24 maximums in their innings before the Windies almost bettered the effort with 22 in their reply.

Moreover, 807 runs were scored in the match; the third-highest aggregate total in ODI history.

Buttler hit the most sixes in an ODI innings for England with 12 as he went from 51 to his hundred in 15 balls.

Chris Gayle smashed a breathtaking 162 as the Windies fell agonisingly short of a famous victory against England in Grenada.

The hosts almost chased down England's 418/6, but the tourists held their nerve for a 29-run win as leg-spinner Adil Rashid took four wickets in the 48th over.

The victory puts England 2-1 up in the five-match series with one game remaining, in St Lucia on Saturday.