New Zealand Cricket (NZC) on Friday confirmed that all-rounder Jimmy Neesham has declined a central contract on the "basis of pre-arranged agreements he had already struck with overseas domestic leagues."

New Zealand Cricket (NZC) on Friday confirmed that all-rounder Jimmy Neesham has declined a central contract on the "basis of pre-arranged agreements he had already struck with overseas domestic leagues." However, the body confirmed that Neesham will still be considered for BLACKCAPS selection when available. The all-rounder also took to Instagram to give his clarification saying, this was a "difficult decision", but it was not feasible for him to go back on his word.

"I know the news of my decision to decline a central contract today will be seen as me choosing money over representing my country. I had planned to accept a contract offer in July, however since being left off the list I have committed to other leagues around the world. It was a difficult decision but I have decided to honour those commitments rather than go back on my word to re-sign with NZ Cricket," Neesham wrote on Instagram.

"Playing for the @blackcapsnz has been the greatest honour of my career and I remain committed to taking the field with my countrymen for the foreseeable future, especially in pinnacle world events," he added. 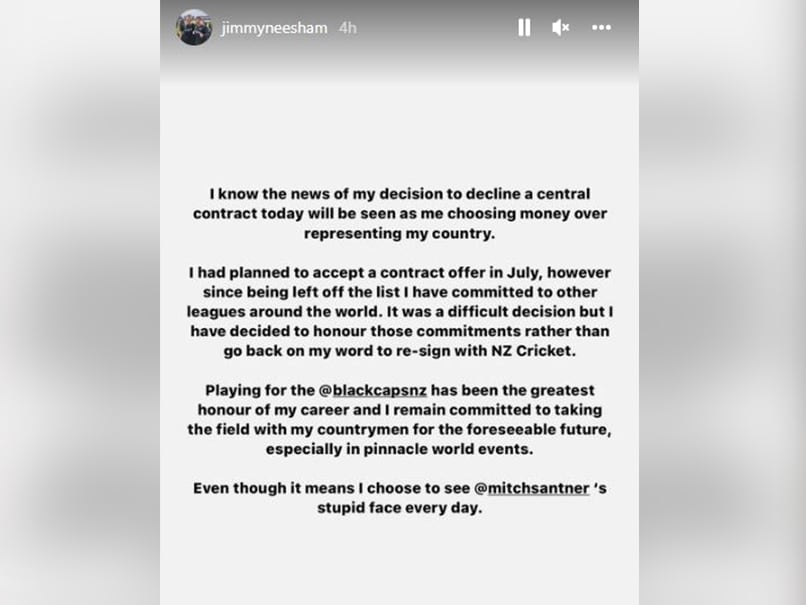 Tickner, the Central Stags pace bowler, has played six ODIs and 11 T20s for the BLACKCAPS, while 23-year-old Wellington batsman Allen has already represented his country in eight ODIs and 13 T20s.

Both featured on the BLACKCAPS winter tours of Ireland, Scotland and the Netherlands, and Allen also played in the most recent series in the West Indies and Australia.

BLACKCAPS coach Gary Stead said each of the newcomers to the central contracts list had been close to the top 20 announced in May, and had taken their opportunities in the interim.

“Blair's been in BLACKCAPS squads for all three formats over the past 12 months which is testament to his progress,” he said in an official statement.

“He's a bowler who just keeps improving and we've been particularly impressed with his red-ball development, which saw him in the recent squads for the England and South Africa Tests," he added.

James Neesham Cricket
Get the latest updates on Fifa Worldcup 2022 and check out  Fifa World Cup Schedule, Stats and Live Cricket Score. Like us on Facebook or follow us on Twitter for more sports updates. You can also download the NDTV Cricket app for Android or iOS.