Irani Cup: Rest of India Come From Behind to Beat Mumbai in Record Chase 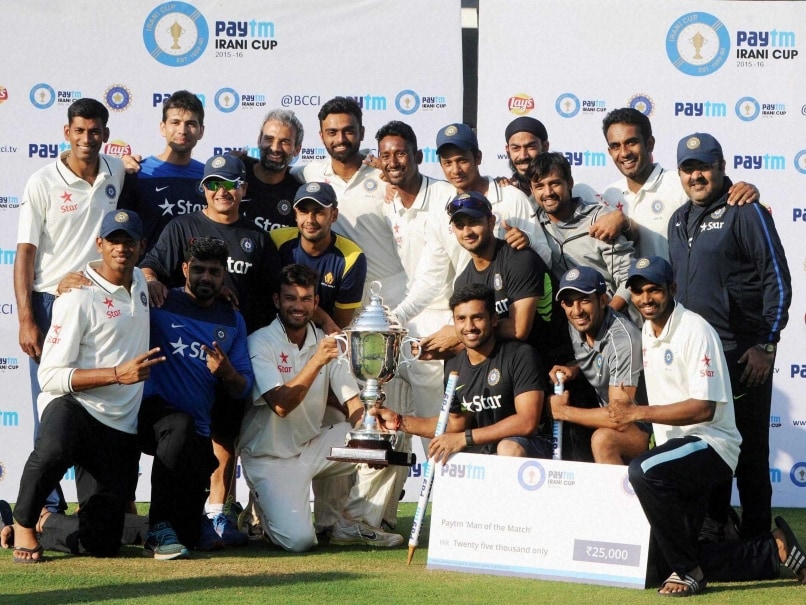 Rest of India batsmen displayed collective brilliance as they planned a classic run-chase to perfection against Ranji Trophy champions Mumbai, winning the Irani Cup by 4 wickets reaching a mammoth victory target of 480 runs in Mumbai. (Read More in Cricket)

Vidarbha's left-handed opener Faiz Fazal (127, 280 balls) and Sudeep Chatterjee (54) of Bengal held the innings together for the first part while Karun Nair (92, 132 balls), Stuart Binny (54 off 51 balls), Sheldon Jackson (59 no) pounced on the opportunity to pulverise a below-par bowling attack taking the team to victory in 129.4 overs.

Starting the day at 100 for 1 and needing 380 more runs on the final day to achieve the third-highest successful run-chase in Indian first class cricket history, Rest achieved the target with 20 balls to spare.

Fazal led the way at the top of the order with a patient 127, his 11th first class hundred, in 280 balls with 10 fours, besides featuring in two century stands - 110 for the second wicket with Chatterjee and 130 for the 3rd wicket with Nair, who hit seven boundaries. It was Nair, who got the man-of-the-match award for scoring pair of 90's.

Though Mumbai fought back with left-arm spinner Iqbal Abdullah (5/154) striking thrice in quick time to pack off this trio of batsmen, and captain Naman Ojha (29) was run out brilliantly, Rest had enough quality batsmen - especially the hard-hitting Binny - to overhaul the stiff target from their tea score of 321 for 3.

They needed 159 from 35 overs in the final session and achieved their goal, the final charge after being enabled by the partnership of 92 runs in 101 balls and 56 minutes for the sixth wicket between Karnataka's Binny and Saurashtra's Sheldon Jackson.

Binny, who struck two towering sixes - including one into the press box on the second storey of the club house - and also hit three fours, fell when Rest needed 35 runs, caught cutting Abdullah at point.

But Rest were far ahead in their quest and succeeded in denying Mumbai any additional silverware for the season and also prevented the 41-time Ranji champions from lifting the Irani title for the 16th occasion and the first since 1997-98.

Jackson, who remained unbeaten after facing 76 balls and striking four fours and a six, and Jayant Yadav (19 not out) helped the Rest cross the finish line with ease in the end, the former also fittingly hitting the winning shot - a four. Their unconquered seventh wicket partnership was worth 37 runs.

The Rest batsmen's exploits on the final day thoroughly exposed the lack of sting in the Mumbai bowling attack on a Brabourne Stadium track, which had become a true batsmen's paradise over the last two days.

Abdullah was the most successful bowler with a five-for but he lacked adequate spin support. Mumbai were also let down by their trio of medium pacers - Dhawal Kulkarni, Shardul Thakur and Balwinder Singh Sandhu -who, looked pedestrian and spoilt Mumbai's huge 297-run first innings advantage.

The successful run-chase was also the third-highest in the Indian domestic first class history.

The highest remains West Zone's incredible chase of 536 riding on Yusuf Pathan's 210 in the 2010 Duleep Trophy final at Hyderabad followed by South Zone's successful chase of 501 on the back of Venugopal Rao's 228 and centuries from S Sriram and S Badrinath in a Duleep league game at Gurgaon inÂ 2004.

The successful chase was also the best-ever run-chase in the Irani history, bettering Rest's 424 chasing 421 set by Delhi at the Ferozshah Kotla in 1982-83 though that chase was achieved in two and a half sessions on the last day.