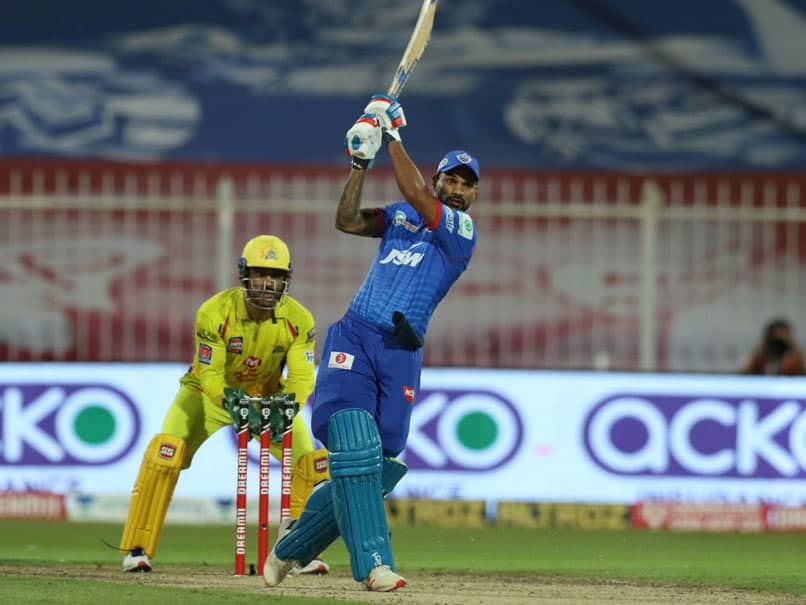 Chennai Super Kings (CSK) skipper MS Dhoni said that credit goes to Shikhar Dhawan for scoring a maiden ton in the Indian Premier League (IPL) and steering Delhi Capitals to a five-wicket win. Dhawan played a knock of 101 not out off 58 balls studded with 14 fours and a six. All-rounder Axar Patel's 21 off 5 in the last over played a crucial role in getting Delhi over the line. Jadeja bowled the last over and conceded 22 runs off it.

Explaining his move of handing the last over to Jadeja, Dhoni said in the post-match presentation: "Bravo was not fit. He went out and didn't come back. The options were Jaddu (Jadeja) and Karn (Sharma). I went with Jaddu."

Speaking on CSK's inability to get Dhawan dismissed, Dhoni said: "Shikhar's wicket was important but we dropped him quite a number of times.

"If he keeps batting, he will keep the strike rate high. Also, the wicket played better in the second half, but we can't take the credit away from Shikhar."

In the last two overs, Delhi Capitals needed 21 runs but Sam Curran bowled brilliantly and gave away just four runs in the 19th over.

However, a final over cameo by Axar which saw him whacking three sixes helped Delhi Capitals chase the target with one ball to spare.

Dhoni said that the wicket played better in the second innings and there was enough dew to make the pitch better.

"There wasn't a lot of dew, but there was just enough to make the pitch better. That makes a big difference: minus 10 when you are batting, and the extra 10 for the team batting second," Dhoni said.

"A positive was Sam's last over. He needs to be convinced that he can execute outside off (stump) yorkers, that is something most of the coaching staff want the bowlers to bowl.

"If you are not comfortable doing it, you can't really push in the game. I feel this game will give him a lot of confidence when it comes to executing outside off yorkers.

"I feel that will be one delivery that is slightly difficult to hit," the wicket-keeper batsman added.

With this win, the Shreyas Iyer-led side has regained the top position in the points table with 14 points.

Chasing 180 runs, Delhi Capitals got off to the worst possible start as Prithvi Shaw chipped the ball straight back to Deepak Chahar in the very first over.

Ajinkya Rahane then joined Shikhar Dhawan in the middle but their partnership didn't flourish as Sam Curran took an exceptional catch at point and Rahane had to walk back to the pavilion in the fifth over.

Skipper Iyer and Dhawan then rebuilt the innings with the latter smashing 40th IPL half-century.

However, Dwayne Bravo dismissed Iyer to jolt Delhi in the 12th over. Meanwhile, Dhawan continued his fine form and smashed boundaries at regular intervals.

With 71 needed in the last seven overs, Marcus Stonis and Dhawan accelerated to bring down the ever-mounting required rate. Stonis smashed 24 runs off 14 balls before getting out in the 16th over.

Delhi Capitals required 41 runs in the last four overs before Dhawan started his onslaught. The equation came down to 21 runs off the last two overs with Delhi finally getting over the line.

Earlier, after opting to bat first, Ambati Rayudu and Ravindra Jadeja's knocks powered CSK to 179/4 in their 20 overs.

MS Dhoni Delhi Capitals vs Chennai Super Kings, Match 34 IPL 2020 Cricket
Get the latest updates on IPL 2021, IPL Points Table , IPL Schedule 2021 , live score . Like us on Facebook or follow us on Twitter for more sports updates. You can also download the NDTV Cricket app for Android or iOS.