India vs Sri Lanka: Visitors Make Merry On Day One Of Warm-Up Game

Four batsmen scored half-centuries to take Sri Lanka to 411 for six on day one of their two-day warm-up against Board President's XI on Saturday. 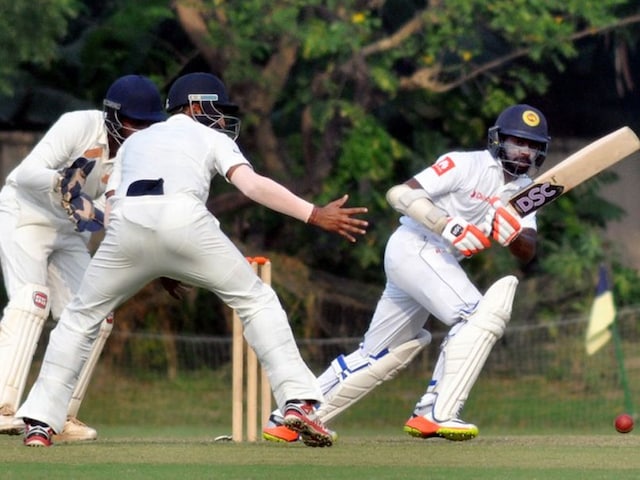 Four batsmen scored half-centuries to take Sri Lanka to 411 for six on day one of their two-day warm-up against Board President's XI on Saturday. Sadeera Samarawickrama geared up for a potential opening slot with a stroke-filled 74 off 77 balls and shared a 133-run stand with Dimuth Karunaratne (50 retired) as Sri Lanka declared at the end of day's play after being put in to bat by Board President's skipper Sanju Samson.

Wicket keeper batsman Niroshan Dickwella, who retired on 53, resumed his innings after the dismissal of Suranga Lakmal (3) in the 80th over and lit up the proceedings in final session with an unbeaten 73 off 59 balls. His innings was studded with 13 boundaries.

Comeback-man Angelo Mathews (54 retired) also struck a half-century while No. 8 Dilruwan Perera (48 from 44) too enjoyed his time in the middle against an ordinary bowling attack before bad light stopped play after 88 overs.

It may not be ideal practice ahead of what lies in store against the world number one Indian team but Sri Lanka's upcoming players like Samarawickrama showed promise with fluent shots all around at the Jadavpur University second campus ground in Saltlake.

Samarawickrama, who made his Test debut in the second and final Test against Pakistan in Dubai last month, faced the first delivery and showed his positive intent with a fluent off-drive.

The in-form left-handed opener Karunaratne, fresh from a career-best 196 against Pakistan in the second Test last month, gave fine support at the other end as the duo gave the team a brisk start with 102 in 16 overs.

Samarawickrama looked exquisite with his strokemaking as he drove and cut with equal ease.

He was also not afraid to step out to Board's spin duo of Jalaj Saxena and Akash Bhandari and completed his fifty off 46 balls, while his senior opening partner Karunaratne got to the mark in 62 balls before getting retired in the 23rd over.

In the next over, Samarawickrama looked unsettled and miscued a hook from Avesh Khan and was caught at fine-leg as his impressive innings has virtually sealed the opening slot in place of axed Kaushal Silva in the first Test at Eden Gardens from November 16.

Silva, who made a comeback in the two Test series in UAE against Pakistan, made 67 runs in four innings with a top score of 27.

Ace all-rounder Mathews, who is making a comeback after sustaining a calf injury in September that ruled him out of the entire Pakistan series, also looked in rhythm in his 93-ball effort before retiring at tea.

The only blip was when he was dropped on 53 by Jiwanjot Singh at slip before the tea break, while Sri Lankan skipper Chandimal retired on 29 and opted for some throwdowns at the adjacent nets.

Sri Lanka had little trouble against the lacklustre bowling attack from the Board's team barring pacer Avesh Khan, who returned with figures of 1/68 after a marathon 11-over spell. Pacer Sandeep Warrier and leg spinner Akash Bhandari returned with two wickets each.