The Team India captain lists outs the pains of working out under the Sri Lankan sun. 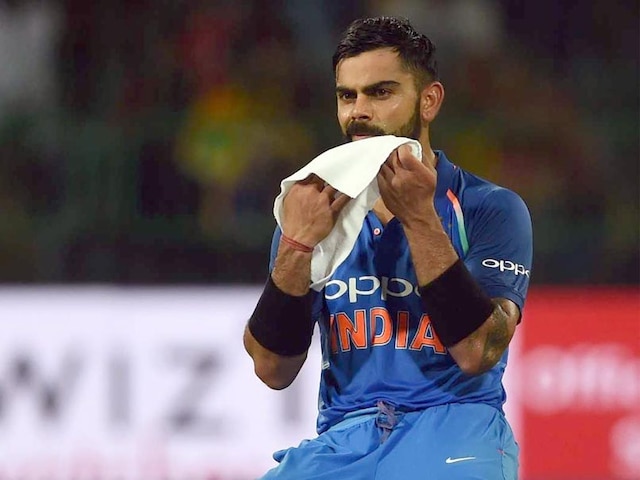 Virat Kohli led the way with his century as India defeated Sri Lanka by six wickets in the fifth and final One-day International at the R Premadasa Stadium in Colombo on Sunday. This was Kohli's second century in the five-match ODI series and 30th of his 194-ODI career. After the victory, He shared his image on Twitter handle. "My face when I gotta work in the sun again after a hectic game the previous day," Kohli's tweet read.

My face when I gotta work in the sun again after a hectic game the previous day. ???? pic.twitter.com/7eASO9uPh1

In hot and humid conditions in Colombo, Kohli scored a match-winning 131 runs knock in the fourth ODI and followed his sublime form in the fifth and final ODI with a spectacular ton. With this century, the Indian captain equalled the former Australia captain Ricky Ponting (30 centuries).

Chasing a target of 239 runs, India crossed the line with 21 balls to spare.

Kohli remained unbeaten on 110 runs off 116 balls, smashing nine boundaries along the way. He was involved in a 108-run partnership with Kedar Jadhav (63 runs off 73 balls).

India thus whitewashed Sri Lanka 5-0 in the series. The visitors, who remained dominant throughout the series, produced another superb performance during Sunday's match, dominating the Sri Lankans in all departments of the game.

After guiding India to a 168-run win over Sri Lanka, Kohli had said: "It was very difficult. It was very hot and humid".

"We (Rohit and me) decided not to run any more twos after the first 16 overs because it was so hot and humid. Actually, it was very helpful not to focus on too many things. We were not even thinking of anything else. We were not looking at the scoreboard and we were watching every ball," Kohli had said.

Comments
Topics mentioned in this article
India Cricket Team Sri Lanka Cricket Team Sri Lanka vs India 2017 Virat Kohli R.Premadasa Stadium, Colombo Cricket
Get the latest Cricket news, check out the India cricket schedule, Cricket live score . Like us on Facebook or follow us on Twitter for more sports updates. You can also download the NDTV Cricket app for Android or iOS.