The young pacer bowled first to India opener Shikhar Dhawan and then to Virat Kohli. 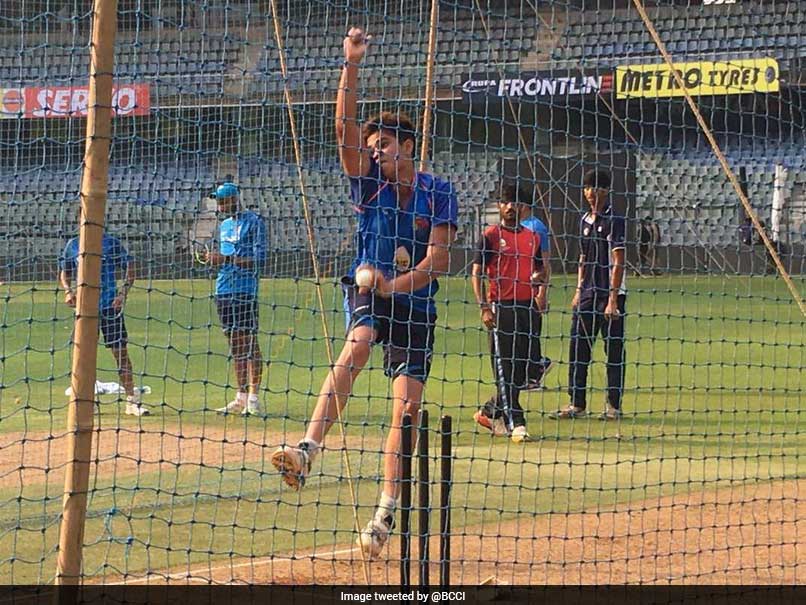 Ahead of the first One-Day International against New Zealand, Mumbai's Under-19 bowler and cricket legend Sachin Tendulkar's son Arjun Tendulkarwas seen bowling to the likes of Virat Kohli and his team-mates at nets on Friday. Arjun bowled under the watchful eyes of Team India's head coach Ravi Shastri and bowling coach Bharat Arun.

We are at the Wankhede Stadium and our preparations for the #INDvNZ have begun. pic.twitter.com/DoeBzcCXSc

The young pacer bowled first to India opener Shikhar Dhawan and then to Kohli. He also bowled to Ajinkya Rahane and middle order batsman Kedar Jadhav.

He was later seen interacting with Bharat Arun.

This was not the first time Arjun was bowling at the nets.

He had also helped women's team at the iconic Lords before their ICC World Cup final against England.

The Tendulkar family has a home near Lord's and he has often been spotted at the venue.

In July this year, England were dealt with an injury scare ahead of the first Test against South Africa after Jonny Bairstow suffered an unexpected knock on the foot. The right-hander was hit by a yorker off Arjun's delivery during a practice session at Lord's.

Bairstow limped out of the nets after playing just one ball from the 17-year-old.

Last year, Arjun was selected in the Under-16 West Zone squad for an inter-zonal tournament.

Arjun, who was named in a Mumbai U-19 squad for an invitational tournament, is a budding left-handed seamer.

Comments
Topics mentioned in this article
India Cricket Team New Zealand Cricket Team India vs New Zealand Cricket Shikhar Dhawan Virat Kohli Arjun Tendulkar Kedar Jadhav Ajinkya Rahane
Get the latest updates on ICC T20 Worldcup 2022, check out the Schedule and Live Score. Like us on Facebook or follow us on Twitter for more sports updates. You can also download the NDTV Cricket app for Android or iOS.