Hardik Pandya has been given the responsibility of the new ball and will be key to keeping the England openers under wraps. Jos Buttler's hitting prowess is well known around the world but England will be expecting more consistent performances from him. 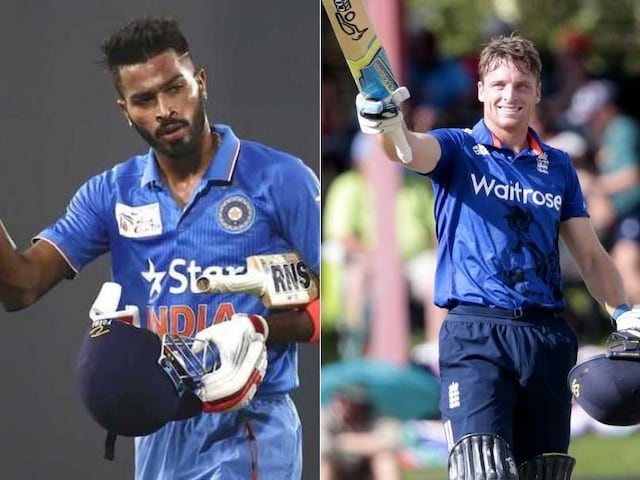 Hardik Pandya and Jos Buttler will be crucial to their teams' cause when India and England face-off.© AFP

Hardik Pandya and Jos Buttler will be crucial to their teams' cause when India and England meet in the limited-overs series, starting with the first ODI on January 15. While Pandya is inexperienced in the ODI format, having only played four matches, a lot will be expected from Buttler, who has represented his country 81 times in the 50-over format. Pandya is expected to lead the Indian attack with the new ball while Buttler will be expected to hold the middle-order together.

Here is a look at how the two players match-up:

Hardik Pandya has caught the eye right from the onset. He made his ODI debut in October 2016 against New Zealand in Dharamsala and had an immediate impact. The 23-year-old bowled seven overs and took three wickets in his debut match. The highs of his debut have quickly dissipated. He has managed to add just one more to his wickets tally in three more games and has managed to score just 45 runs in four matches with a high score of 36.

Pandya has played 16 T20 internationals, where he has taken 15 wickets and scored 78 runs. Virat Kohli has in his armoury the likes of Bhuvneshwar Kumar and Ishant Sharma and if Pandya is to nail down a place in the Indian squad, he will need to do a lot more, especially with the bat. His IPL batting performances show that he has the calibre to score runs but that is yet to be proved on the international stage. But it's still early days for the Indian all-rounder.

Jos Buttler has a wealth of experience in both ODIs and T20Is. In ODIs, Buttler has scored 2,217 in 81 matches with an average of 38.89. He has four centuries to his name with a top score of 129. Being a wicketkeeper, Buttler has 101 catches and 12 stumpings in ODI cricket.

But what is even more impressive is the rate at which he scores. To have an average of above 35 and a strike rate that reads 120.29 just goes on to show the hitting abilities he possesses.

Buttler has played 50 T20Is and has scored 928 runs at an average of 28.12. He has a top score of 73 not out but again the key part to his game is the strike rate. Buttler has a strike rate of 140.18 in the shortest of the game and this gives him the ability to change the face of the game in a matter of few overs. Virat Kohli and the Indian think-tank would definitely have identified him as one of the dangermen in the English batting line-up.

Comments
Topics mentioned in this article
India Cricket Team England Cricket Team Hardik Himanshu Pandya Jos Buttler India vs England 2016-17 Cricket
Get the latest updates on IPL 2020, check out the IPL Schedule for 2020 and Indian Premier League (IPL) Cricket live score . Like us on Facebook or follow us on Twitter for more sports updates. You can also download the NDTV Cricket app for Android or iOS.