India U-19 side start World Cup campaign against West Indies

After almost two years of togetherness that included an extensive training programme at the NCA, the Indian Under-19 side will start its campaign against the West Indies U-19 with its confidence on a high, here on Sunday. 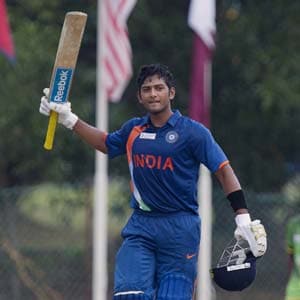 After almost two years of togetherness that included an extensive training programme at the NCA, the Indian Under-19 side will start its campaign against the West Indies U-19 with its confidence on a high, here on Sunday.

What gives them the confidence is that they they've played and beaten most of the oppositions while winning two of the three tournaments they've been part of in this period.

They have now learnt the art of recovering from difficult situations, can adjust to foreign conditions, and deal with the pressure in close finishes.

According to coach Bharath Arun, "confidence" and "self belief" are two things the side has in abundance.

As far as the build-up to the tournament was concerned, they had an extensive camp at the National Cricket Academy in Bangalore where they honed their skills, besides interacting with with Yuvraj Singh, an Under-19 World Cup winner in 2000, and Rahul Dravid.

The players of this team started playing together in Visakhapatnam in September 2011, at a quadrangular tournament involving teams from Australia, West Indies and Sri Lanka.

They had a successful start as they defeated their oppositions without much trouble.

Captain Unmukt Chand said that success had given the team a lot of belief.

"It gave us belief, that was the first time we played together as a team and we didn't lose a single match," Unmukt said.

Their next tournament, however, was here, where they lost. Having never played in Australia before, they were beaten in all their league matches by England, New Zealand and the hosts.

But to be fair, the boys then had no clue of the wickets, the conditions and the oppositions. This is an opportunity for them to better their performance Down Under.

Comments
Topics mentioned in this article
Cricket Unmukt Chand Bharathi Arun
Get the latest updates on ICC T20 Worldcup 2022 and CWG 2022 check out the Schedule, Live Score and Medals Tally. Like us on Facebook or follow us on Twitter for more sports updates. You can also download the NDTV Cricket app for Android or iOS.