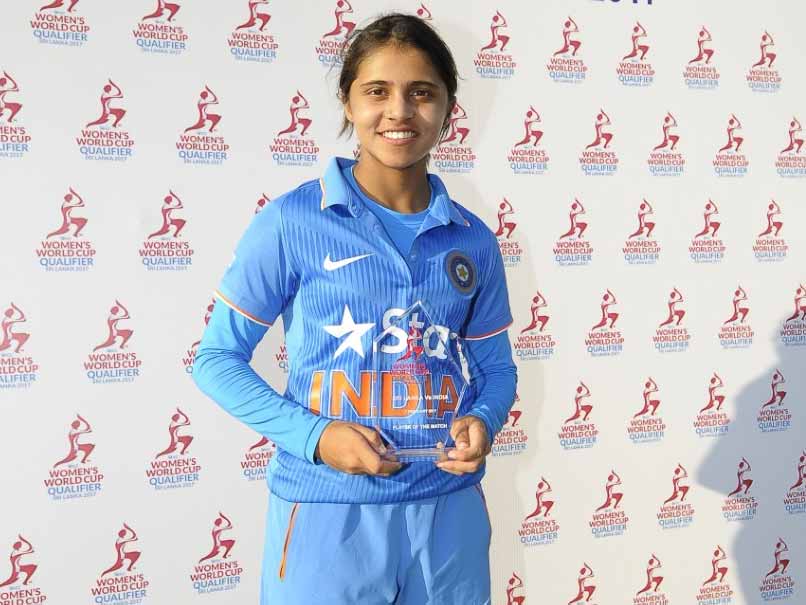 Devika Vaidya was named Player of the Match for her top score of 89 vs Sri Lanka.© NDTV

India chalked out a comprehensive 114-run win against Sri Lanka in their ICC Women's World Cup qualifer opening match at P Sara Oval in Colombo on Tuesday. India opened their campaign in style as they produced a collective batting performance to thrash Sri Lanka. India piled up runs after electing to bat on a good batting pitch and put up a total of 259/4. In reply, Sri Lanka could managed just 145/8 in 50 overs in a Group A match.

The Indian eves put behind their six-wicket loss to South Africa in a warm-up game and scored a comprehensive victory, riding on superb show by Devika Vaidya, who top scored with 89 and opener Deepti Sharma (54), before skipper Mithali Raj also chipped in with an unbeaten 70.

After getting off to a slow start, reaching 11 for one in seven overs, the left-handed pair of Devika and Deepti took control and put India on the road to a big score.

The two 19-year-olds added 123 runs together for the second wicket.

Vaidya, whose knock consisted of 11 fours and came off 103 balls in only her second ODI, was declared the player of the match.

Deepti smashed four boundaries and a six during her 96-ball innings.

Mithali then played herself in and knocked up an unbeaten 70 off 62 deliveries for her 41st ODI fifty.

For Sri Lanka, Hasini Perera (34) and Chamari Athapaththu (30) were the only ones to get notable scores.

"It's always good to start with a win. We had started slowly in the match but Devika and Deepti put up a useful partnership to help increase the run rate. It was a good pitch to bat on and we enjoyed batting out there," said Mithali.

Comments
Topics mentioned in this article
India Women Sri Lanka Women P Sara Oval, Colombo Cricket
Get the latest updates on ICC T20 Worldcup 2022 and CWG 2022 check out the Schedule, Live Score and Medals Tally. Like us on Facebook or follow us on Twitter for more sports updates. You can also download the NDTV Cricket app for Android or iOS.