3rd unofficial Test: As it happened - Zaheer, Pujara help India A win by an innings and 54 runs

Zaheer Khan returned with the figures of four for 59 after lunch to guide hosts to series leveling victory over West Indies A at Hubli. 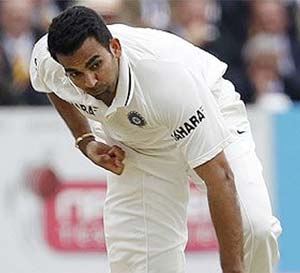 India A registered a convincing 54-run win over West Indies A in the third unofficial Test at Hubli to square the three-match series. Catch all the highlights:

# That's that!Zaheer Khan delivers at the right time as he takes the three more wickets to wrap up West Indies A innings at 242, helping India A win by an inings and 54 runs and level the three-match series 1-1. Narsingh Deonarine top scored with 99 for the visitors. Abhishek Nayar bagged two wickets while Dhawal Kulkarni, Ishwar Pandey and Bhargav Bhatt got one wicket each.

# LUNCH! That's the end of first session. The visitors have done well to frustrate Indian bowlers. Narsingh Deonarine is batting on 85 with Nikita Miller on seven not out. Abhishek Nayar has bagged both the wickets for the hosts. West Indies A 268 and 199/5 (61 overs) in reply to India A's 564/9d.

# WICKET!Abhishek Nayara finds success in breaking the 82-run stand between Assad Fudadin and Narsingh Deonarine. Fudadin is caught by Uday Kaul for 49. West Indies A 268 and 139/4 (44.5 overs).

# FIFTY!Narsingh Deonarine scores a patient half-century off 94 balls with the help of seven fours. Assad Fudadin, his partner, is batting on 44 as the two have added 76 runs for the fourth wicket. West Indies A 268 and 133/3 (40 overs), trail India A by 163 runs.

India A skipper Cheteshwar Pujara cracked his third triple ton in first-class cricket as India A rode on his brilliance to force West Indies A stare at an embarrassing defeat in the third unofficial 'Test' in Hubli on Friday.

West Indies trail the hosts by 180 runs with seven wickets remaining in their second innings.

Pujara notched up an unbeaten 306 in a masterly exhibition of batsmanship as India A declared their first innings at 564 for nine just at the stroke of tea in reply to West Indies A's 268 in their first essay, to take a substantial 296-run lead.

At stumps on day three, the Indians had reduced the visitors to 116 for three in their second innings at KSCA Stadium. (Read Day 3 report)

Comments
Topics mentioned in this article
Cricket Cheteshwar Pujara
Get the latest updates on ICC T20 Worldcup 2022 and CWG 2022 check out the Schedule, Live Score and Medals Tally. Like us on Facebook or follow us on Twitter for more sports updates. You can also download the NDTV Cricket app for Android or iOS.