India A Trail Bangladesh by 133 Runs in Warm-up Game

India A ended Day 1 of the two-day tour game against Bangladesh at 91/1 after the visitors declared at 224/8. 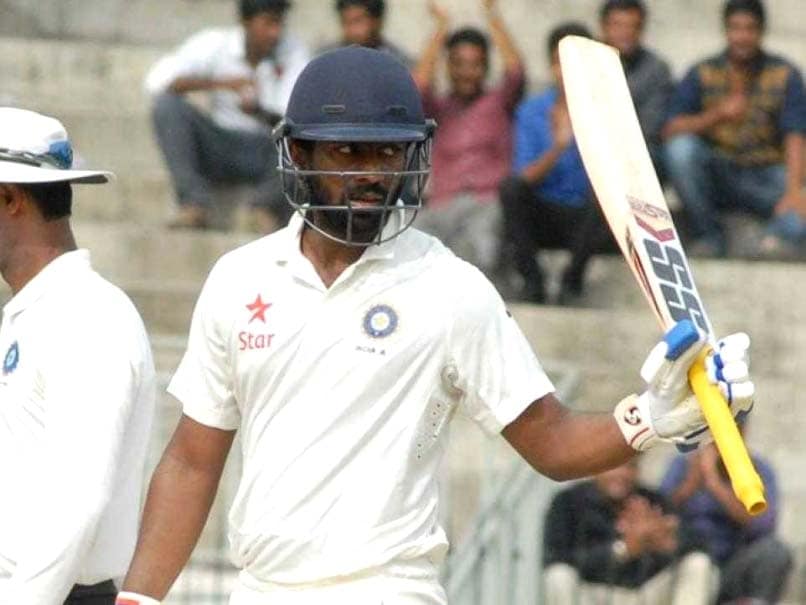 Abhinav Mukund is leading India A against Bangladesh in Hyderabad.© PTI

India A, at 91/1,trailed Bangladesh by 133 runs at close of play on Day 1 of the two-day tour game against Bangladesh after the visitors declared at 224/8 at Gymkhana Ground in Hyderabad on Sunday. Opting to bat after winning the toss, only two Bangladeshi batsmen - skipper Mushfiqur Rahim and Soumya Sarkar - have had decent batting practice days before the one-off Test against world number one India. While Mushfiqur made 58 off 106 balls, Sarkar struck 52 off 73.

At stumps, Priyank Panchal (40) and Shreyas Iyer (29) were at the crease for India A. India A trailed by 133 runs with nine wickets remaining.

Sabbir Rahman (33), Liton Das and Mahmudullah (both 23) pitched in with useful contributions for the visiting side.

Choudhary missed a hat-trick in the 61st over after having got the wickets of Mushfiqur and Mehdi Hasan.

Bangladesh suffered a setback in the fifth over with local lad CV Milind picking up the wicket of opener Imrul Kayes.

After the departure of openers Tamim Iqbal and Kayes, Sarkar and Mushfiqur steadied the ship with their steady batting.

Besides Choudhary, CV Milind, Vijay Shankar, Shahbaz Nadeem and Kuldeep Yadav claimed one wicket each for the home team.

The visitors declared their innings in the 67th over though they had two wickets in hand.

Opener Panchal scored 40 in 62 balls, with the help of six boundaries.

India A skipper Abhinav Mukund was dismissed by Subhashis Roy after making 16.

The one-off Test between Bangladesh and India is scheduled to be held in the city from February 9.

Comments
Topics mentioned in this article
India Cricket Team Bangladesh Cricket Team Abhinav Mukund Cricket
Get the latest updates on India vs South Africa and check out  Schedule, Results and Live Score. Like us on Facebook or follow us on Twitter for more sports updates. You can also download the NDTV Cricket app for Android or iOS.