ICC Corrects Mistake After Being Trolled For Rahul Dravid Gaffe

The ICC was trolled mercilessly after listing former India captain Rahul Dravid as a left-handed batsman on its Hall of Fame page. 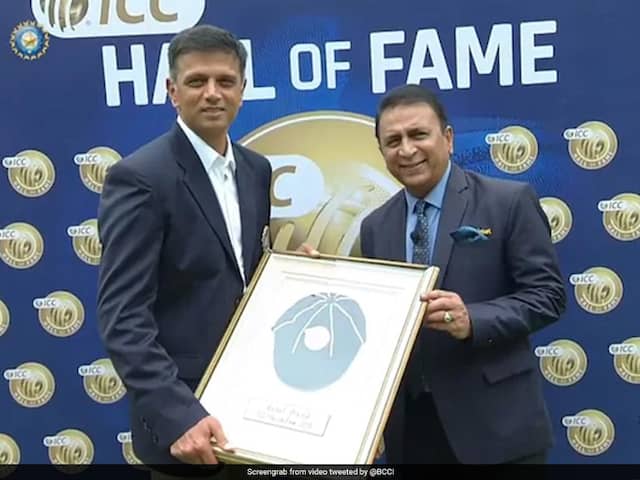 The International Cricket Council (ICC) made a major goof-up when they referred to Rahul Dravid as a left-hand bat on their Hall of Fame page. Fans on Twitter mercilessly trolled cricket's world governing body for its embarrassing gaffe. However, the the Hall of Fame page, which is available on ICC's official website, has been updated and the mistake rectified. In November last year, India's batting great, referred to as 'The Wall' by many, was officially inducted into the ICC Hall of Fame, becoming only the only the fifth player from India after Bishan Singh Bedi, Kapil Dev, Gavaskar and Anil Kumble to be named on the elite list.

However, on Friday, reports emerged in the Indian media, pointing to ICC's mistake where it listed Dravid as "BATTING: LEFT-HAND".

Fans were left fuming by the error and took to Twitter to slam the international governing body.

@ICC @ICCMediaComms ...ICC are u drunk ? Or high on what ?? When did Rahul Dravid bat left handed !! A world governing body can't get facts right of a legend ! #RahulDravid pic.twitter.com/62rXaGv0T7

@ICC Rahul Dravid is a left-handed batsman? How can your website make such a big mistake at https://t.co/Kmbmz3Hziy? Incorrect batting style is mentioned in the Hall of Fame list. This is a big mistake. Such a mistake is serious on the official website of the Supreme of Cricket. pic.twitter.com/ZXsFUJWr1h

Rahul dravid is left hand batsman? last year he was inducted in Hall of Fame, but ICC may not aware about his batting style.pic.twitter.com/rXgXq5xNkd

While checking @ICC Official site, I have found mistake in Hall of fame section. 'Rahul Dravid' is Right Hand Batsman and the record is written wrong showing Left Hand Batsman.

My kind request is to correct it. pic.twitter.com/vMv03p0jfy

A huge mistake from the #ICC
They calls Rahul Dravid left-handed batsman. pic.twitter.com/oXIunxN86u

What is it @ICC
Did you know him or not? #RahulDravid pic.twitter.com/1M6ogR5FBD

@ICC the disappointing thing I saw on Hall of Fame is #RahulDravid sir being mentioned as a left hand batsman. @BCCI it would be good if you can take care of such silly mistakes. pic.twitter.com/XCwUe5Xuhe

The mistake was corrected and Dravid's information updated on ICC's website. 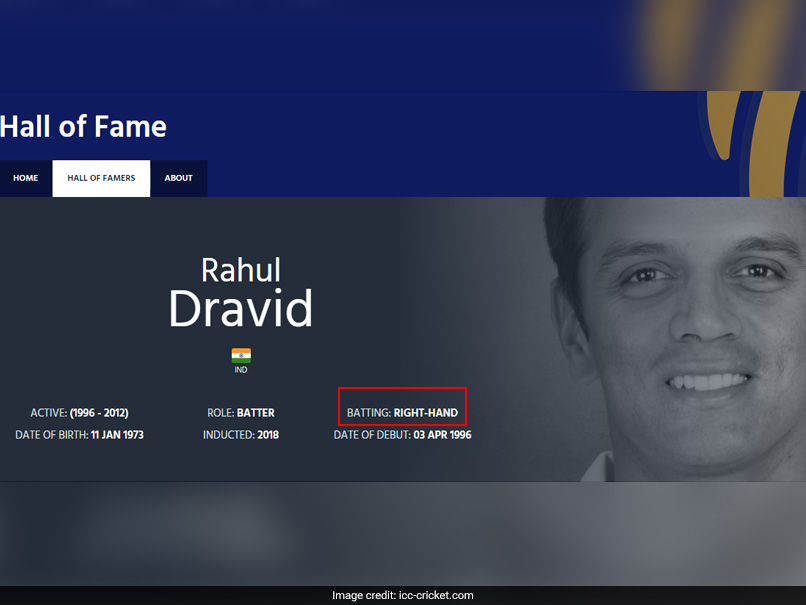 On July 2, 2018, the ICC had announced Dravid and Australian legend Ricky Ponting's induction into the Hall of Fame during a ceremony in Dublin.

However, the memento was presented to Dravid by India's legendary opener Sunil Gavaskar ahead of a One-Day International (ODI) between India and the Windies in Thiruvananthapuram.

In July this year, batting maestro Sachin Tendulkar was inducted into the ICC Hall of Fame, thus becoming the sixth Indian to receive the honour.

Tendulkar, the most prolific batsman in history, was inducted immediately after becoming eligible for induction, which requires that a player should have played his last international match at least five years before.

The 46-year-old former right-hand batsman is regarded the greatest to have played the game along with Sir Donald Bradman and remains the top run-accumulator in both Tests and ODIs.

Rahul Dravid International Cricket Council Cricket
Get the latest updates on IPL 2020, check out the IPL Schedule for 2020 and Indian Premier League (IPL) Cricket live score . Like us on Facebook or follow us on Twitter for more sports updates. You can also download the NDTV Cricket app for Android or iOS.