Waqar Younis was the Pakistan coach during the national side's semi-final appearances during World Twenty20 2010 and World Cup 2011. He had quit post-World Cup 2011 but has now returned as head coach. 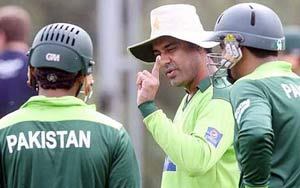 Waqar Younis has returned for his second stint as Pakistan coach

Pakistan head coach Waqar Younis said Tuesday he has returned for his second coaching stint with a positive frame of mind and wants to bring more aggressiveness to the squad ahead of next year's World Cup.Â  (Shoaib Malik Takes a Dig at PCB, Questions Misbah-ul-Haq's Future)

Younis led the team to the semi-finals of the 2010 World Twenty20 and 2011 World Cup before resigning in August 2011 for personal reasons, though differences with the players also reportedly played a role in his departure. (Reality Grips Pakistan, No Bilateral Series Till Government Nod)

"My mindset will be to play positive cricket and play to win. There's no defensive approach involved in it and hopefully boys will understand what I am trying to say," Younis told reporters in the eastern city of Lahore.

He acknowledged there were a few problems during his last tenure as coach, but he has learned from his mistakes "There are problems even in a family, but a good coach is the one who negates all those problems and keeps all the players together.

"Last time it was my first experience as a head coach... I will try that if some mistakes were committed it won't be repeated."

Pakistan will compete against Sri Lanka, Australia and New Zealand ahead of the 2015 World Cup, which Younis said should give it enough preparation for the event.

The squad is currently led by 40-year-old captain Misbah-ul-Haq in both Test matches and one-day internationals. The Pakistan Cricket Board has yet to name a Twenty20 skipper following Mohammad Hafeez's decision to step down earlier this year.

Younis didn't wade into the captaincy debate, saying only that naming a long-term captain was preferable to having one on a series-to-series basis. "I know a sword keeps hanging on the captain, but it should be like that, the captain has to be on his toes," he said.

"You have to think about a young (captain) for Test, one-day and Twenty20 because if you look, there are two to three players who are on the wrong side of 30s and 40s."

Younis said that while Pakistan needs to add youngsters to its squad, it must also look to experienced players like 7-foot-1 (2.16-m) fast bowler Mohammad Irfan for the upcoming World Cup in Australia and New Zealand. Irfan has not played international cricket since injuring his hip last year.

Comments
Topics mentioned in this article
Pakistan Cricket Team Waqar Younis Cricket
Get the latest updates on ICC Women's Cricket World Cup 2022 and IPL 2022, check out the Schedule , Live Score and IPL Points Table. Like us on Facebook or follow us on Twitter for more sports updates. You can also download the NDTV Cricket app for Android or iOS.