May quit yesterday after being the face of FICA for eight years, lashing out at the sport's administrators and their alleged "threats, intimidation and backroom deals". Adams hoped the new office-bearers would match May's dedication. 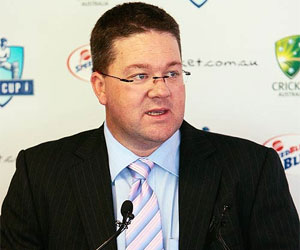 The Federation of International Cricketers' Associations (FICA) on Thursday unveiled a new leadership structure after the resignation of its long-serving CEO Tim May by making Paul Marsh the Executive Chairman of the body.

"Mr. Marsh is the current Chief Executive of the Australian Cricketers' Association (ACA), and will continue to operate in this capacity alongside his new role, which will involve him being accountable for FICA's performance and being the organisation's main spokesperson," FICA said in a statement.

Smith has been the Legal Director of the Professional Cricketers' Association (PCA) since 2004 and has assisted May at FICA for the last few years. He will be responsible for the day to day operational management of FICA.

"The contribution of Tim May to FICA and cricketers worldwide has been enormous and in many respects he is irreplaceable," he said.

"Our game continues to throw up issues of great complexity, and strong player representation through FICA and the individual player associations has never been more important. FICA is committed to continuing Tim's wonderful legacy by ensuring that the voices of the players always be heard," he added.

May quit yesterday after being the face of FICA for eight years, lashing out at the sport's administrators and their alleged "threats, intimidation and backroom deals".

May was last month ousted from an ICC players' committee amid allegations of pressure from India. The Australian said he was tired of battling the governing body.

"The FICA Board is excited by the appointments of both Paul Marsh and Ian Smith. Paul has been at the forefront of player advocacy for 12 years at the ACA, the past eight as CEO. He has proven to be a strong, respected and passionate leader who has also contributed enormously as a member of the FICA Board," he said.

"Ian has demonstrated his dedication, expertise and passion throughout his time with the PCA and FICA and along with Paul, will ensure our member associations and their players continue to be represented in a strong, unified and tireless manner," he added.

Comments
Topics mentioned in this article
Cricket Australia Cricket Team Simon Katich Jimmy Adams Andrew Symonds Pune Warriors India Timothy Brian Alexander May
Get the latest updates on T20 World Cup, check out the T20 World Cup Schedule and Live Score . Like us on Facebook or follow us on Twitter for more sports updates. You can also download the NDTV Cricket app for Android or iOS.