The 27-year-old Craig Kieswetter was left with vision problems after breaking his nose and damaging his cheekbone while batting in a County Championship match against Northamptonshire in July last year. 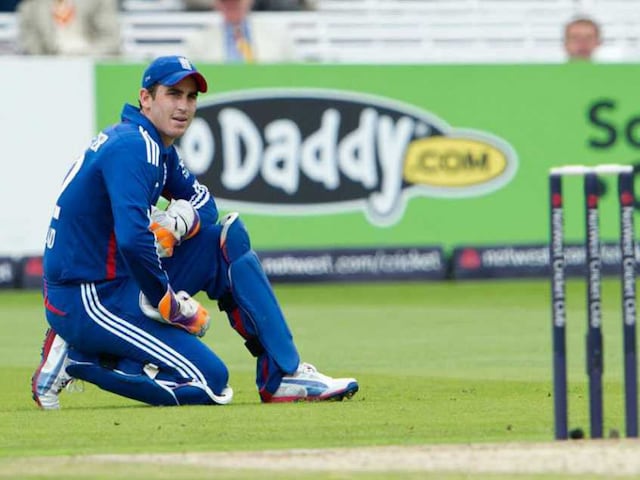 England and Somerset wicketkeeper/batsman Craig Kieswetter has been forced to retire due to an eye injury, he announced on Friday.(Kieswetter's Career Hangs in Balance After Eye Injury)

The 27-year-old South Africa-born player was left with vision problems after breaking his nose and damaging his cheekbone while batting in a County Championship match against Northamptonshire in July last year.(Kieswetter Out of World Cup)

"Having gone through that experience of my eye injury and everything it entailed, I feel mentally I will never again be the player that I was," Kieswetter said in a statement on the Somerset website.

"I have had a terrific career, with plenty of ups and occasional downs, and I am calling time on my career and walking away with no regrets."

In first-class cricket and list A cricket, he averaged just under 40 with the bat, while his average in Twenty20 was just under 32. Behind the stumps he claimed 308 catches and 11 stumpings.

He scored 497 runs in the domestic T20 Blast in 2014 and 419 runs in the County Championship prior to suffering his injury at Wantage Road, when a bouncer went through his helmet grille and struck him in the face.

"This is sad news for all concerned," said Somerset director of cricket Matt Maynard.

"At his best, Craig was one of -- if not the -- most explosive 'keeper-batsmen' in the game. He is an extremely gifted cricketer, who could win a game on his own.

"His record speaks for itself and the game will miss him. I would have loved to have worked with him this year, but it just wasn't to be."

Kieswetter, who has a Scottish mother, made his Somerset debut in 2007.

He played his first game for England in 2010 and starred in their victory over Australia in that year's Twenty20 World Cup final in the West Indies, scoring 63 runs and being named man of the match.

"I'll have so many memories of a career that spanned nine years of my life during which I have made so many friends," Kieswetter added. "See you all on the sidelines."

Comments
Topics mentioned in this article
England Cricket Team Craig Kieswetter Cricket
Get the latest Cricket news, check out the India cricket schedule, Cricket live score . Like us on Facebook or follow us on Twitter for more sports updates. You can also download the NDTV Cricket app for Android or iOS.