England suffered a setback before play started when they were forced to leave out Jofra Archer after the fast bowler admitted to breaking coronavirus protocols. 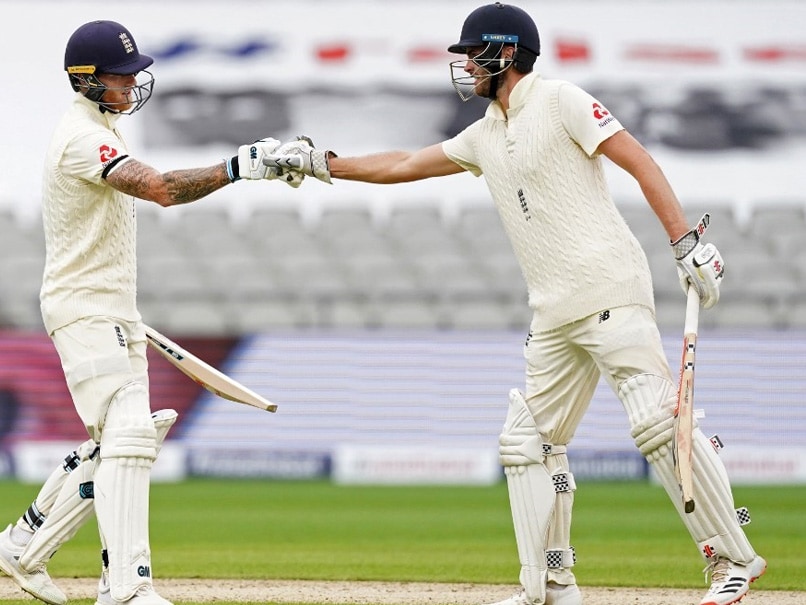 Dom Sibley and Ben Stokes got England back into the game with an unbroken stand of 126.© AFP

Dom Sibley's painstaking unbeaten 86 helped England recover from an early collapse to be 207/3 at stumps on the first day of the second Test against the West Indies at Old Trafford on Thursday. Warwickshire opener Sibley batted out the day's 82 overs during more than six hours at the crease on the way to posting his second successive fifty of the series. England, in a match they have to win to level the three-match contest, were in trouble at 29-2 after off-spinner Roston Chase took two wickets in two balls either side of lunch.

But the twice dropped Sibley and Ben Stokes (59 not out) got England back into the game with an unbroken stand of 126 after they lost the toss in overcast, bowler-friendly conditions.

England suffered a setback before play started when they were forced to leave out Jofra Archer after the fast bowler admitted to breaking coronavirus protocols.

Archer left the bio-secure bubble where his teammates were staying to go home to Brighton on Monday following the end of the first Test, before the team travelled up to Manchester.

His absence deprived England of genuine speed on a pitch that traditionally assists fast bowlers after the hosts had already decided to rest Mark Wood, as well as James Anderson.

West Indies' quicks, however, made a wayward start in a match where a win would see the Caribbean side secure a first Test series victory in England for 32 years.

But on the stroke of lunch, Chase struck with just his second ball to have Rory Burns lbw for 15.

And the first ball back saw England's 29-1 become 29-2 when Zak Crawley fell for a golden duck after tamely turning Chase straight to West Indies captain Jason Holder at leg-slip.

England captain Joe Root, who missed his side's four-wicket loss in last week's first Test at Southampton to attend the birth of his second child, survived the hat-trick.

He helped Sibley add 52, with much of that stand compiled while West Indies fast bowler Shannon Gabriel -- man-of-the-match at Southampton -- was off the field injured.

But young paceman Alzarri Joseph, using the width of the crease, lured Root, then on 23, into chasing a ball outside off stump, with second slip Holder catching a thick edge.

Sibley had a let-off shortly before tea when, on 44, a tough chance went down at short leg off Chase.

And he was reprieved again on 68 when the usually reliable Holder dropped a routine slip chance off Gabriel, who had come back on to bowl.

Sibley had another worrying moment on 82 he survived an lbw appeal from fast bowler Kemar Roach on umpire's call.

Meanwhile, the normally fluent all-rounder Stokes, back among the ranks after standing in as skipper at Southampton, needed 119 balls to reach fifty on a day where a sluggish outfield deprived England of several boundaries.

As happened during the first Test, players from both teams and the umpires took a knee in support of the Black Lives Matter campaign before play started at Old Trafford.

Jason Holder Cricket
Get the latest updates on IPL Auction 2023 and check out  IPL 2023 and Live Cricket Score. Like us on Facebook or follow us on Twitter for more sports updates. You can also download the NDTV Cricket app for Android or iOS.