The second Test between England and Pakistan ended in a draw after rain delays meant both teams could only play one innings each. 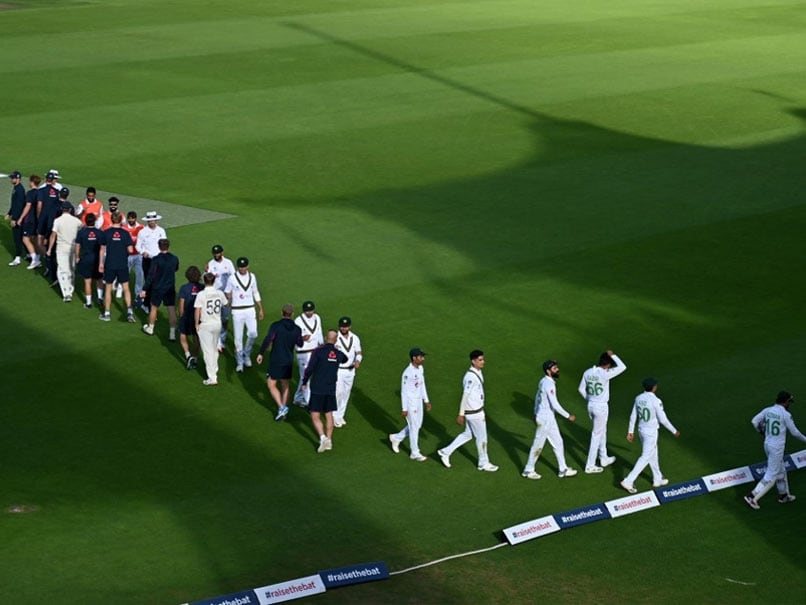 Pakistan's Mohammad Abbas took two wickets on Monday as a weather-interrupted second Test against England at Southampton ended in a predictable draw. England were 110-4 in reply to Pakistan's first innings 236 when home captain Joe Root (nine not out) declared to hasten the end of a match ahead of what would have been the statutory last hour. Joe Root's declaration ended a match beset by delays, with the whole of Saturday's third day washed out completely. Abbas, who took 2-28 from 14 overs, removed Zak Crawley (53) and Dom Sibley (32).

The batsmen shared a second-wicket stand of 91 after Rory Burns fell for a duck to left-arm quick Shaheen Afridi on Sunday.

England, who enjoyed a three-wicket win in the first Test at Old Trafford earlier this month, remain 1-0 up in a three-match series ahead of Friday's finale, also at Southampton.

An early morning downpour meant Monday's play did not start until 1420 GMT.

England were then 7-1, with Sibley two not out and Crawley, playing after star all-rounder Ben Stokes opted out to be with his ill father in New Zealand, five not out.

Pakistan captain Azhar Ali, perhaps wary of risking his frontline quicks in a dead match ahead of the third Test, brought medium-pacer Shan Masood, primarily an opening batsman, into the attack.

Mohammad Rizwan, who had impressed behind the stumps in the first Test before top-scoring with 72 in a man-of-the-match innings in this fixture, then missed a chance to stump Crawley, on 37, off leg-spinner Yasir Shah.

Crawley completed a 97-ball fifty when he pulled Yasir for the seventh four of his innings.

But two balls later, Crawley was out when Abbas, with the first delivery of a new spell, had him lbw on the back leg after nipping one off the seam.

It was the start of a mini-collapse that saw England lose three wickets for 14 runs to be 105-4.

Sibley, not for the first time, was caught behind down the legside as Abbas struck again before Ollie Pope was lbw to Yasir.

Azhar bowled one ball to Root, who then declared.

Kettleborough and fellow umpire Michael Gough had been widely criticised for their interpretation of the rules regarding rain and bad light even on a ground where the floodlights have been in use, with former England captain Nasser Hussain telling Sky Sports that "merely because conditions are not ideal is not a reason to walk off the field".

But there was more activity by both the officials and groundstaff on Monday in a season where regulations have been adapted to create a bio-secure bubble that guards against the threat of the coronavirus.

Stuart Broad led England's attack with 4-56, a return that took the in-form paceman's tally in four Tests this season to 26 wickets at a miserly average of 12.38.

Shaheen Afridi Cricket
Get the latest updates on India vs South Africa and check out  Schedule, Results and Live Score. Like us on Facebook or follow us on Twitter for more sports updates. You can also download the NDTV Cricket app for Android or iOS.