A gentleman in the crowd at Lord's provided some comic relief as he struggled to put on his raincoat during the 1st Test between England and New Zealand. 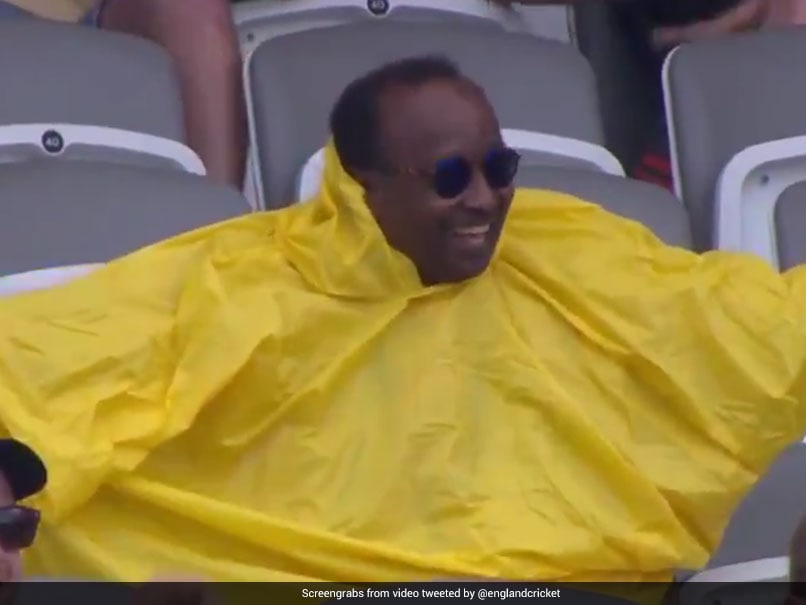 The spectator struggled with the raincoat only to realise he had it on backwards.© Twitter

England's home summer cricket season began with the first Test against New Zealand at Lord's, which ended in a draw. While there was enough action on the field to keep viewers glued to the game, there was also a funny incident in the stands that drew the attention of the crowd and players alike. One fan was seen struggling to put on his raincoat, and as the cameraman focused on him, the rest of the crowd were presented with some comic relief.

After trying to figure out how to put it on for a while, he realises that he is on the big screen and gives a wave. He soon sees that he has put it on backwards, as a roar of laughter erupts in the stadium.

He then takes it off and puts it back on - this time the correct way - and proceeds to raise his arms out wide as if to celebrate the achievement.

The crowd reacts with loud cheers and even England opener Rory Burns, who was fielding at the time, is seen applauding the gentleman.

"They're not as easy at they look"

This man's reaction is everything pic.twitter.com/Czlt0nxSUI

Burns was one of England's star performers in the match, with his century helping the hosts put up a decent total in their first inning after debutant Devon Conway hit a double-century to power New Zealand to 378.

Rain washed out a whole day's play and Dom Sibley and Joe Root did enough in England's second innings to help them play out a draw after New Zealand set them 273 to win.

New Zealand Cricket Team Rory Burns Cricket
Get the latest updates on IPL 2021, check out the IPL 2021 Schedule and Indian Premier League Live Score . Like us on Facebook or follow us on Twitter for more sports updates. You can also download the NDTV Cricket app for Android or iOS.