Australia, cruising to a modest victory target of 232, were dismissed for 207 as England levelled the three-match series at 1-1. 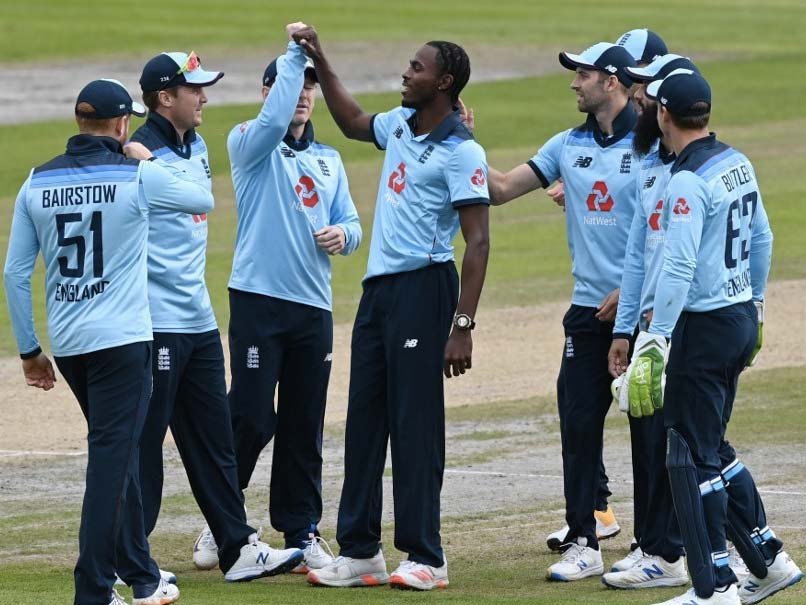 Jofra Archer starred as world champions England staged a stunning fightback to beat Australia by 24 runs in the second one-day international at Old Trafford on Sunday. Australia, cruising to a modest victory target of 232, were dismissed for 207 as England levelled the three-match series at 1-1. The tourists were in command at 144-2, but lost four wickets for three runs -- including Australia captain Aaron Finch for 73 -- to be 147-6, the new-ball duo of Chris Woakes (3-32) and Archer (3-34) returning to do the damage on a used pitch.

And when left-arm paceman Sam Curran, recalled alongside brother Tom, took two wickets in two balls, after Woakes and Archer had completed their maximum 10-over stints, Australia were 166-8.

Sam Curran then had Adam Zampa caught at mid-off from a well-disguised slower ball, to leave Australia on the brink of an extraordinary defeat at 176-9.

Leg-spinner Adil Rashid ended the match with eight balls to spare when he had Alex Carey stumped by Jos Buttler.

Player-of-the-match Archer, asked how he had been so quick so early in his spell, praised the influence of England captain Eoin Morgan.

"I guess if you feel well you are going to bowl well most of the time," Archer told Sky Sports.

"Morgs gives me the freedom to bowl whatever I want. He very seldom tells you 'no, don't do that'," added Archer, who bowled he decisive Super Over in England's dramatic World Cup final win over New Zealand last year.

"This is a second-day wicket so you don't have to do too much or get too funky with variations."

"When the bowling unit bowls like that and bowlers bat like that towards the end of our innings it makes the captain look good, but that is as well as we have bowled for a while," he said.

"It was getting more difficult (to bat) as the match went on, but that's no excuse for the collapse."

Adam Zampa took an impressive 3-36 from a maximum 10 overs to follow the leg-spinner's 4-55 during Australia's 19-run win on Friday.

Morgan top-scored with 42 but could not prevent his side collapsing to 149-8 before Tom Curran (37) and Rashid (35 not out) kept England in the game.

England desperately needed early wickets and Archer obliged when he had David Warner caught behind for just six off a 91.1 mph delivery -- the fourth time the left-handed opener had fallen to the fast bowler in as many international innings this tour.

Marcus Stoinis was again in at number three, with star batsman Steve Smith omitted after missing Friday's match with a head injury suffered batting in the nets.

But Stoinis was left powerless by Archer's rapid bouncer that got the all-rounder in a tangle before the ball lobbed to Buttler.

Archer, having taking 2-22 in his initial five overs, was removed from the attack by Morgan.

An increasingly assertive Finch, hit on the helmet by an Archer bouncer, slammed Rashid for six on his way to a 66-ball fifty.

Marnus Labuschagne (48) gave his skipper sound support in a third-wicket stand of 107 before he was lbw on review to Woakes.

Archer then bowled Mitchell Marsh before Woakes cleaned up Finch and Glenn Maxwell.

Chris Woakes England vs Australia, 2nd ODI Cricket
Get the latest updates on India vs South Africa and check out  Schedule, Results and Live Score. Like us on Facebook or follow us on Twitter for more sports updates. You can also download the NDTV Cricket app for Android or iOS.