England had no choice over Kevin Pietersen axe: Nasser Hussain

Former England captain Nasser Hussain admits the English selectors had to drop Kevin Pietersen for the crucial final Test against South Africa even though they will be weaker in his absence. 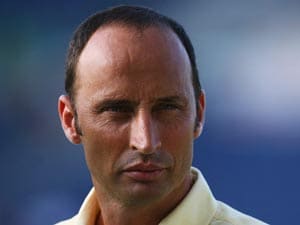 Former England captain Nasser Hussain admits the English selectors had to drop Kevin Pietersen for the crucial final Test against South Africa even though they will be weaker in his absence.

Pietersen has been axed following a dramatic week which included allegations that the controversial England batsman sent text messages criticising his captain Andrew Strauss and coach Andy Flower during the second Test at Headingley.

The South Africa-born star had hinted he was ready to walk away from the sport after that match, in which he scored a dashing century, because of what he perceived as problems in the England squad.

He then launched a bizarre late bid to save his place in the squad on Saturday when he posted a video on YouTube in which he said he was willing to be considered for all forms of international cricket having only recently retired from one-day action.

With England trying to level the series against South Africa with a win at Lord's this week, Hussain knows the move is a gamble but he believes Pietersen's presence was proving too much of a distraction for the rest of the team.

"I was a little bit surprised. It is not often a player gets 149 in a Test match and is left out the next week," he told Sky Sports News.

"English cricket are a worse side without him in the side. Graeme Smith and the rest of the South African team will be sitting there right now and are thinking it is great that Kevin Pietersen is not playing for England.

"No Pietersen does make England a slightly weaker side, but you can't have this all the time where the focus is on one person when it has to be on the team."

In announcing Pietersen's absence from the squad on Sunday, Hugh Morris, Managing Director of England Cricket, claimed the Surrey player refused to publicly denied that he sent the critical text messages.

Hussain believes that, coupled with Pietersen's press conference on Monday when he said it was "tough being me" in the English dressing room, were major factors in him being dropped.

"He's had a bad week off the field, and some really bad decision-making started with that press conference where he blamed English cricket for all his woes," Hussain said.

"Then there was the stuff about texts. Even last night he announces coming back without telling England.

"As a management structure you expect to manage difficult people. Pietersen is an absolute genius. We saw that last week at Headingley, sometimes you have a flawed genius and that is what Kevin Pietersen definitely is.

"It's just a bridge too far. They will put up with a lot from Kevin Pietersen but not the antics of the last week."

Whether Pietersen returns remains to be seen but former England captain Michael Atherton believes if he responds to his exclusion in a positive manner, he could yet have an international future.

"He remains unretired from one-day cricket unless he reacts to this in a different way.," Atherton said. "We will see how this plays out down the line.

"It depends how he reacts really. I don't think given that he is unretired now that (Andy) Flower and (Andrew) Strauss will see it as a permanent axing.

"Therefore much depends how Pietersen reacts to this. If he takes his punishment and keeps quiet, then there is a chance he will come back.

"If he reacts badly to this and he has a history of falling out with people then there may be a permanent falling out and breakdown in relationships."

Comments
Topics mentioned in this article
Cricket Nasser Hussain Andy Flower Kevin Pietersen Ian Bell Michael Atherton England Cricket Team Michael Clarke Eoin Morgan Andrew Strauss
Get the latest updates on ICC T20 Worldcup 2022 and CWG 2022 check out the Schedule, Live Score and Medals Tally. Like us on Facebook or follow us on Twitter for more sports updates. You can also download the NDTV Cricket app for Android or iOS.