Sophie Ecclestone sustained the injury during warm-up ahead of the second ODI. 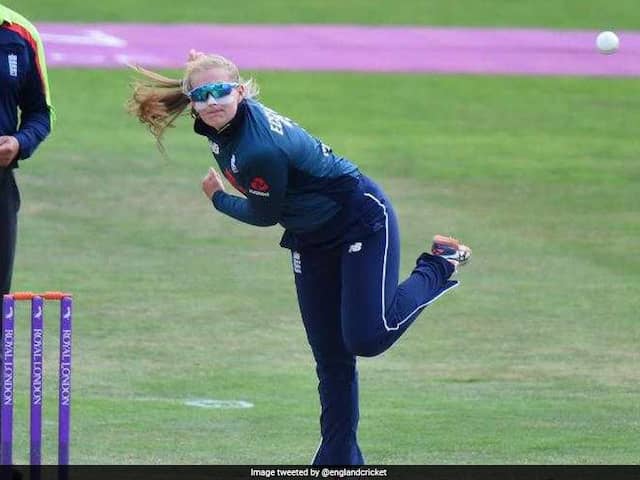 Sophie Ecclestone was ruled out of the last match due to a fractured hand.© Twitter

The struggling England women's team suffered a big blow to their hopes of preventing a clean sweep by India in the ODI series after all-rounder Sophie Ecclestone was ruled out of the last match due to a fractured hand. The third and final ODI is to be held here at the Wankhede Stadium on February 28. Nineteen-year-old Ecclestone, a right-handed batter and slow left-arm orthodox bowler, sustained the injury during warm-up ahead of the second ODI played in Mumbai on Monday.

"Sophie Ecclestone has fractured the fifth metacarpal on her right hand and will fly home from England women's tour of India.

"Ecclestone sustained the injury in the warm-up ahead of Monday's second ODI," England team management said in a media statement on Tuesday.

In the first ODI, she had contributed with the ball picking two wickets and conceding 27 runs, while she remained wicket-less in the second match.

She was able to score just 5 runs from both the games.

"Scans after the match revealed the extent of the injury, which will also rule her out of the upcoming tour of Sri Lanka," the statement said.

"Ecclestone joins fellow spinners Laura Marsh and Kirstie Gordon on the sidelines, although it is hoped that Marsh can return in time for the Sri Lanka leg of the trip," it said.

England will announce a replacement for Ecclestone after the third ODI for the three-match T20 series to be played in Guwahati.

Hosts India have taken an unassailable 2-0 lead in the three-match ODI rubber by clinching the first and second ODI by 66 runs and seven wickets, respectively.

Sources said it was unlikely that Marsh would be fit for Thursday's game.

England will play three ODIs (as part of ICC Women's Championship) and as many T20Is during their tour of Sri Lanka beginning March 16.

India Women Laura Marsh Cricket
Get the latest Cricket news, check out the India cricket schedule, Cricket live score . Like us on Facebook or follow us on Twitter for more sports updates. You can also download the NDTV Cricket app for Android or iOS.