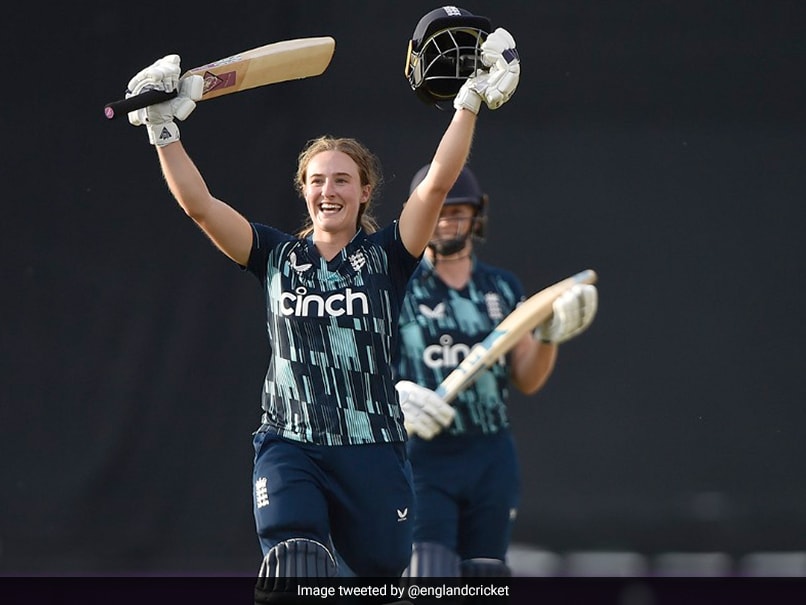 A brilliant century from Emma Lamb and an all-round performance from Nat Sciver powered England to a five-wicket win over South Africa in the first ODI of the three-match series at Northampton on Monday. With this, England have taken a 1-0 lead in the series. Batting first, South Africa were bundled out for 218 in 47.4 overs. Chloe Tryon (88) and Laura Wolvaardt (43) were the top two batters for South Africa. Nat Sciver destroyed the South African batting with her medium-pace, taking 4/59.

Batting first, South Africa were off a shaky start as they lost Andrie Steyn for 14 after she was trapped leg-before-wicket by Katherine Brunt. Brunt cleaned up Lara Goodall for five next with captain Heather Knight taking a good catch at slip, sinking the visitors to 2/34.

Captain Sune Luus and Laura Wolvaardt tried to rebuild things for SA, but Luus was sent packing by spinner Sophie Ecclestone for 7 after her stumps were castled, reducing the side to 3/52. Marizanne Kapp also fell for 12 to Sciver after a brilliant catch by Kate Cross at mid-on.

Following this fourth wicket at 73, Wolvaardt and Tryon stitched a short 35-run stand, which ended with the former being clean bowled by spinner Charlie Dean for a well-made 43 off 72. Half of the South African side was back in the hut for 108.

Tryon and Nadine de Klerk rescued the visitors from sinking further, forming a 97-run stand. They left the hosts struggling to get wickets for a while. Tryon reached his half-century and kept piling runs, but she lost her wicket to Sciver after giving a catch to Cross at deep-midwicket.

The rest of the batters could not give Klerk the support she needed. She was the last batter to fall for 38 at 218 runs.

Sciver (4/59) and Katherine Brunt (3/18) were leading bowlers for England. Ecclestone and Dean got a wicket each.

Chasing 219, England lost Tammy Beaumont for one run after Kapp lured her to drive and castled her stumps.

A 78-run stand between Lamb and Sophia Dunkley followed. It ended with Klerk trapping Dunkley leg-before-wicket for 22. England were at 86/2.

Sciver and Lamb put the hosts out of the game with another massive partnership, putting on 89-runs together. Sciver completed her fifty and continued her dominance in the match. Sciver lost her wicket after scoring 55, taking England to 175 runs. 44 runs were left to be scored with around half the inning still left.

Lamb reached her century and fell for 102 runs at the score of 202 to Tumi Sekhukhune.

Captain Heather Knight (20) and Danii Wyatt (14*) took the team to the finishing line, with over 17 overs to spare. England won the match by five wickets and Lamb's brilliant ton earned her the 'Player of the Match' title.

South Africa Women Nat Sciver Emma Lamb Cricket
Get the latest updates on IPL Auction 2023 and check out  IPL 2023 and Live Cricket Score. Like us on Facebook or follow us on Twitter for more sports updates. You can also download the NDTV Cricket app for Android or iOS.