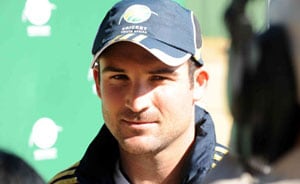 Dean Elgar and Rory Kleinveldt, who are part of recent South African Test squads along with Marchant de Lange and Aaron Phangiso have been awarded contracts for the first time. All-rounder Ryan McLaren has been re-awarded a contract after missing out for the past 12 months.

Five players including Mark Boucher (retired), Ashwell Prince, Rusty Theron, Albie Morkel and Jacques Rudolph have been omitted from the contracted list while Johan Botha was released from his contract at his own request after last year's ICC World Twenty20.

"Dean Elgar has established himself in the Test squad while Rory Kleinveldt has done well across all three formats," said CSA selection convener Andrew Hudson.

"Ryan Mclaren has come back very strongly this season and, like Kleinveldt, has featured across the formats," he added.

Comments
Topics mentioned in this article
Cricket Lance Klusener Albie Morkel MS Dhoni Sreesanth Dean Elgar Aaron Phangiso Rory Kleinveldt Marchant de Lange South Africa Cricket Team
Get the latest updates on SA vs IND 2021-22, check out the Schedule and Live Score . Like us on Facebook or follow us on Twitter for more sports updates. You can also download the NDTV Cricket app for Android or iOS.