Vice Captain Denesh Ramdin says the West Indies would not be taking Bangladesh for granted during their tour which begins on November 13. 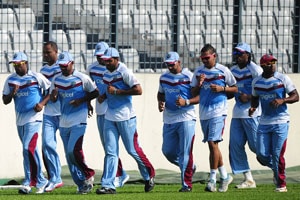 Vice Captain Denesh Ramdin says the West Indies would not be taking Bangladesh for granted during their tour which begins on November 13.

The West Indian players are already in Dhaka and will meet the home side in the first of two Test matches next Tuesday at the Sher-e-Bangla Stadium, reports CMC.

Ramdin says winning the first Test is an important strategy for the visitors.

"(Bangladesh) are a team that on any given day can come and put up a good fight," Ramdin told WICB Media Tuesday.

"We are not going to take them lightly. They have good players, but we are going to play hard. They are favourites in their home conditions, but we are confident that all will go well for us on this tour."

The second test begins Nov 21 at the Sheikh Abu Naser Stadium in the south-western city of Khulna to be followed by five One-day Internationals and a Twenty20 International.

Ramdin has described the playing conditions in Bangladesh as similar to what exists in the Caribbean.

The Windies squad includes off-spinner Sunil Narine on his first trip to Bangladesh and left-arm spinner Veerasammy Permaul on his debut tour with the senior squad.

"It is very important that we start well and not take them lightly," the West Indies wicketkeeper said.

"We have some good players in the fray, like Chris Gayle, Marlon Samuels and Shivnarine Chanderpaul, and hopefully they can give us the impetus to do well in this series."

The West Indies cricketers are still on a high following their sensational win over Sri Lanka to claim the ICC World Twenty/20 title last month.

Ramdin said the players would have to overcome the diet of limited-overs cricket which they have been playing in the last few months.

"We would like to win this series, but it will depend on the weather. Hopefully, we can all prepare well and adapt quickly to the conditions. It is very important that we keep the momentum from winning the World T20 going," he said.