Delhi Capitals now have 6 points from 5 matches. Royal Challengers Bangalore, still without a win, are stuck on 0 points. 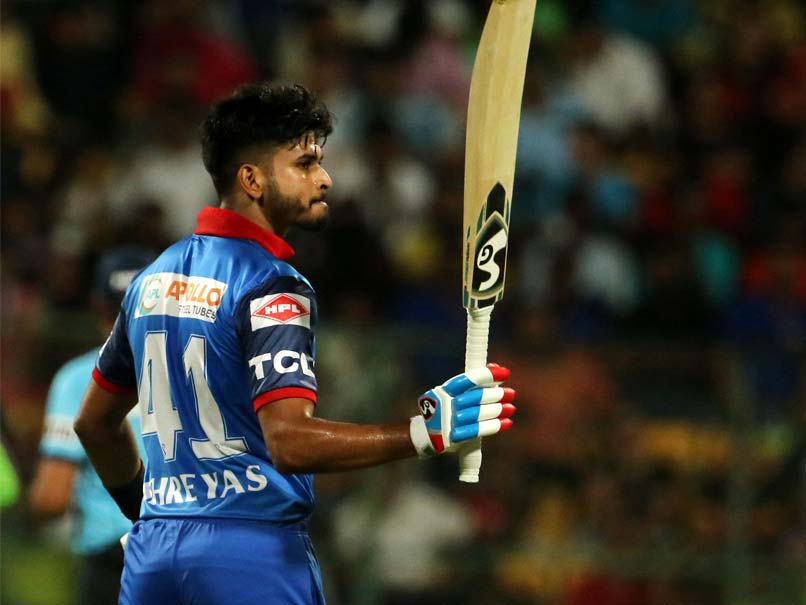 Chasing 150 for victory in their IPL 2019 match against Royal Challengers Bangalore at the M Chinnaswamy Stadium, Delhi Capitals rode on skipper Shreyas Iyer's 50-ball 67 to get to victory with 7 balls to spare. RCB, now having lost six consecutive matches, are stuck at the bottom of the table with 0 points. DC, now having won three matches in six, are now at fifth position on the table with 6 points. The visiting team looked moments away from another last-moment implosion as a spate of quick wickets towards the end seemed to inject some excitement into a match the result of which looked to have been a foregone conclusion. However, the DC lower order held their nerves to canter to victory with seven balls to spare.

RCB batsmen found the going tough on a tough wicket after being invited to bat first and could only manage 149 for 8 in the stipulated 20 overs.

With the ball not coming on to the bat, Kohli scored almost a-run-a-ball before hitting two sixes late in his innings, consuming 33 balls for his 41. Had it not been for Kohli and Moeen Ali's contributions, RCB would have been in deep trouble. Ali hit a 18-ball 32.

Shreyas Iyer then played a captain's knock, making a 50-ball 67 to guide Delhi Capitals to a comfortable win, bringing their IPL campaign back on track.

Iyer anchored the chase with some crucial partnerships as Delhi overhauled the target with 10 balls to spare. Iyer smashed eight fours and two sixes in his 50-ball innings which helped Delhi grab the fifth place in the points table, snapping a two-match losing streak where they lost to Kings XI Punjab and Sunrisers Hyderabad in the last two games.

Chasing 150 to win, Iyer forged a 68-run partnership with opener Prithvi Shaw (28) after Shikhar Dhawan was dismissed by Tim Southee in the third ball of the innings.

In the 9th over, Pawan Negi removed Shaw after the batsman top-edged a delivery and was caught at deep square leg by Akshdeep Nath.

Iyer then shared 39 runs with Colin Ingram (22), who blasted two fours and a six in his 21-ball stay before being trapped by Moeen Ali in the 14th over while trying to play a shot over the leg side.

Rishabh Pant came out with intent, blasting a couple of fours, while Iyer too smashed a six off Yuzvendra Chahal in the 17th over but the skipper miscued a pull off Navdeep Saini and was caught at short cover by Chahal.

With just five runs needed, Delhi survived some anxious moments after losing Chris Morris (0) and Pant - both trying to clear the in-field and perishing in the process. Axar Patel then smashed a four to take Delhi home.

Earlier, Kohli played an uncharacteristicly sedate knock. Ishant Sharma was economical upfront, while Chris Morris was a bit expensive though he sent back Parthiv Patel (9), who slogged hard at a widish delivery and found Sandeep Lamichhane on the boundary ropes.

Young Rabada was introduced to bowl the last over in Powerpay and he got his national teammate AB de Villiers (17). Kohli was still there but the runs came only in one and twos. In nine overs, RCB scored just 53.

Marcus Stoinis hit only second six of the innings by lofting one from Lamichhane over long-on. Stoinis went after Axar Patel too but ended up giving a catch to Rahul Tewatiya.

England all-rounder Ali came to the crease and suddenly batting looked easy. He pulled and drove with ease. Ali spoilt Ishant's figures, hitting him for a six and a four and also dispatched one from Lamichhane to long-off.

The Nepalese spinner, though, had him stumped soon on a googly. Kohli smashed two sixes off Lamichhane, who bowled first one in slot and the second one very short. However, Rabada dismissed the rival captain, Akshdeep Nath and Pawan Negi in one over.

Virat Kohli IPL 2019 Royal Challengers Bangalore vs Delhi Capitals, Match 20 Cricket
Get the latest updates on ICC T20 Worldcup 2022 and CWG 2022 check out the Schedule, Live Score and Medals Tally. Like us on Facebook or follow us on Twitter for more sports updates. You can also download the NDTV Cricket app for Android or iOS.