Sreesanth has challenged in top court the decision of a division bench of Kerala High Court which had restored the life ban imposed on him by BCCI. 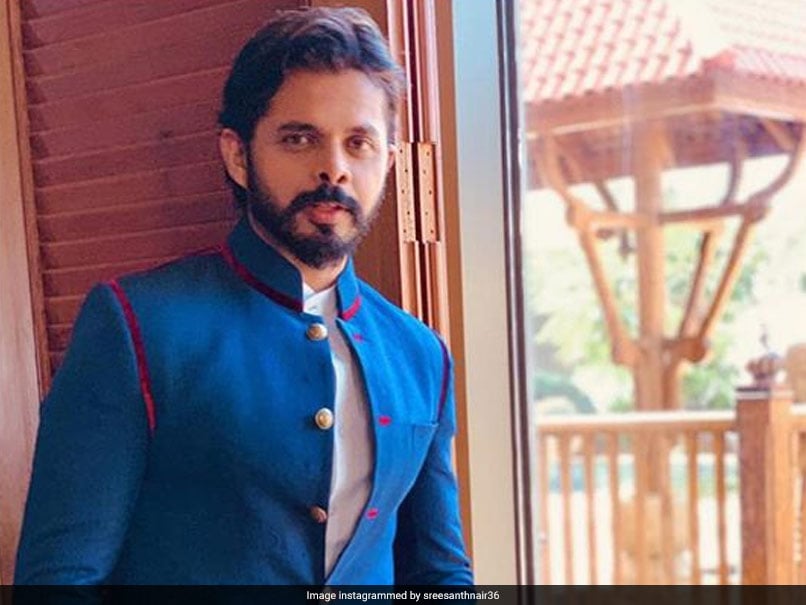 Sreesanth was arrested and later discharged by a trial court in July 2015.© Instagram

The Board of Control for Cricket in India (BCCI) on Thursday told the Supreme Court that the life ban imposed on Indian cricketer S Sreesanth for his alleged involvement in the 2013 IPL spot-fixing scandal was "fully sustainable in law" as he had "tried to influence" a match. Countering the arguments advanced by the counsel representing the BCCI, Sreesanth's lawyer told the bench of justices Ashok Bhushan and KM Joseph that no spot-fixing took place during the IPL match and allegations levelled against the cricketer were not substantiated by evidence.

The 35-year-old cricketer has challenged in the top court the decision of a division bench of the Kerala High Court which had restored the life ban imposed on him by the BCCI.

Senior advocate Parag Tripathi, appearing for the BCCI, referred to the recorded telephonic conversations in the matter and told the court it was clear that money was demanded and was "probably received" also.

"The decision of the disciplinary committee (imposing life ban on Sreesanth) is fully sustainable in law," Tripathi told the bench, adding that proceedings of the committee in the matter was "on a thing which affects the game of cricket".

He said there were allegations that Rs 10 lakh was paid to Sreesanth for conceding 14 runs in his second over in an Indian Premier League (IPL) match between Rajasthan Royals and Kings XI Punjab at Mohali in May 2013.

During the hearing, the bench, which reserved its verdict on Sreesanth's plea, asked Tripathi, "What is the evidence that Rs 10 lakh was received by him before the match?".

Responding to the query, the senior lawyer referred to Sreesanth's answer given to a showcause notice issued to him and said he did not give any specific answers on the Rs 10-lakh allegation.

"This still remain unanswered," he said.

Senior counsel Salman Khurshid, appearing for Sreesanth, told the bench that the cricketer could have answered this if the questions asked to him were specific.

"They (BCCI) cannot jump to a conclusion that this is tainted money," Khurshid said.

"The offending action did not take place. 14 runs were not given in the over and spot-fixing did not happen at all," he said, maintaining that Sreesanth had not committed any illegality.

During the arguments, Tripathi also dealt with the issue raised by Sreesanth''s counsel about former BCCI President N Srinivasan being one of the members of the disciplinary committee.

He said Srinivasan had "voluntarily" stepped down as BCCI president and later he was exonerated of the charges which had cropped up during the probe into the allegations of betting and spot-fixing.

He said the disciplinary committee proceedings had happened after Srinivasan resumed charge as the BCCI chief.

Khurshid, however, argued that a person "who was under the cloud" and had stepped down from his post after apex court's orders should not have been part of the committee.

On the issue of burden of proof, Khurshid said it was clearly on the BCCI to prove the allegations beyond reasonable doubt.

"I pray to your lordships' conscience that let the young man (Sreesanth) come back to the field and play for whatever time which is left in him," he said, adding, "I rest my case and hope that this court will save the career of this young man".

Sreesanth had on Wednesday claimed in the top court that BCCI's decision imposing life ban on him was "completely unfair" and the Delhi Police had "continuously tortured" him in custody to extract confession of his involvement in the case.

Sreesanth, who was arrested and later discharged by a trial court in July 2015 in a criminal case related to the alleged spot-fixing, had claimed he had to confess his involvement in the alleged crime as police tortured him in custody and threatened to implicate his family in the case.

His counsel had argued that as per allegations, Sreesanth was supposed to concede 14 runs in an over but he gave away 13 runs and the commentary during the match reflected he had not bowled loose deliveries in that over.

The Delhi Police had arrested Sreesanth, along with cricketers Ajit Chandila and Ankeet Chavan, and others on charges of spot-fixing.

As many as 36 accused in the spot-fixing case, including Sreesanth, Chavan and Chandila, were discharged by a trial court here in July 2015.

The BCCI, however, had refused to alter its disciplinary decision of life ban on Sreesanth even after the trial court's verdict.

India Cricket Team Sreesanth Cricket
Get the latest updates on ICC T20 Worldcup 2022, check out the Schedule and Live Score. Like us on Facebook or follow us on Twitter for more sports updates. You can also download the NDTV Cricket app for Android or iOS.