Sreesanth had told the top court that he has offers to play English county matches and the life ban imposed on him by BCCI is "too harsh". 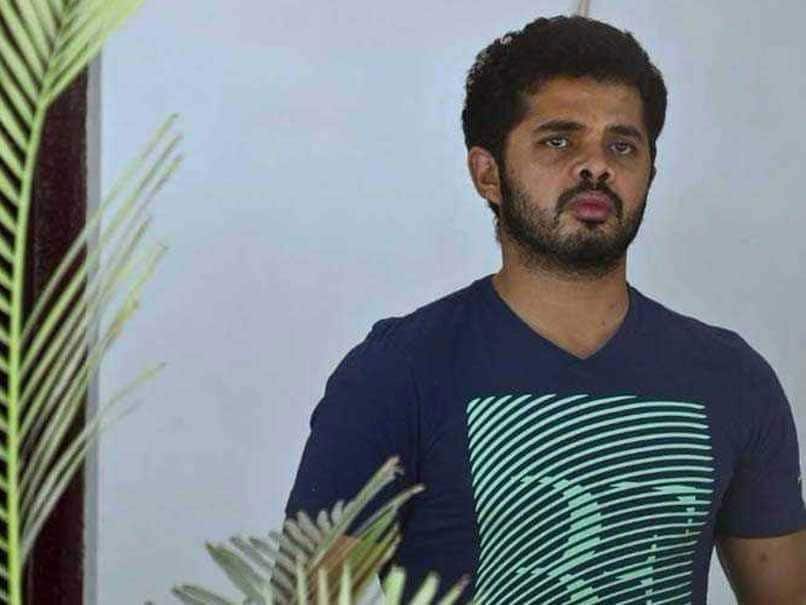 Sreesanth was arrested and later discharged by a trial court in New Delhi in July 2015.© AFP

Banned cricketer S Sreesanth claimed in the Supreme Court on Wednesday that BCCI's decision imposing life ban on him was "completely unfair" and Delhi Police "continuously tortured" him in custody to extract confession of his involvement in the 2013 IPL spot-fixing scandal. Sreesanth, who was arrested and later discharged by a trial court in New Delhi in July 2015 in a criminal case related to the alleged spot-fixing, claimed he had to confess his involvement in the alleged crime as police tortured him in custody and threatened to implicate his family in the case.

The 35-year-old cricketer has challenged in the top court the decision of a division bench of the Kerala High Court which had restored the life ban imposed on him by the Board of Control for Cricket in India (BCCI).

His counsel told a bench of justices Ashok Bhushan and KM Joseph there was "no clear proof" and evidence of match fixing and Sreesanth has suffered a lot in the past five-six years.

"In the context of facts and manner in which these things have happened, this court should consider that it (life ban on Sreesanth by BCCI) is unfair. He has suffered for last five-six years. People want him to play cricket. He was extremely loyal to BCCI," senior advocate Salman Khurshid, appearing for Sreesanth, told the bench.

Khurshid said it was not established that any spot-fixing was done in the match played between Indian Premier League teams Rajasthan Royals and Kings XI Punjab in Mohali in May 2013 and there was no evidence that the cricketer received any money for this.

"The team (Rajasthan Royals) and its owners were banned for two years only. It is completely unfair that this (life ban) has happened with him (Sreesanth)," Khurshid said.

On the issue of his confession before police about his involvement in the alleged crime, the lawyer said, "The confession was due to continuous torture by Delhi Police. According to Sreesanth, police had threatened to implicate his family if he does not confess to the crime."

Khurshid argued the "standard of proof" against Sreesanth was nothing compared to the serious allegations levelled against him and the recorded telephonic conversations were not provided to him during the inquiry proceedings by BCCI''s disciplinary committee.

Referring to the recorded telephonic conversations, he said there was no evidence to substantiate the claim that Sreesanth had received money for conceding 14 runs in an over during the IPL match in Mohali.

Khurshid argued that as per allegations, Sreesanth was supposed to concede 14 runs in an over but he gave away 13 runs and the commentary during the match clearly reflected he had not bowled loose deliveries in that over.

He said it was alleged that Sreesanth tucked a towel in his trouser to give indication to bookies before the start of the over but the fact was he had used towel during matches since 2009.

The lawyer argued that Sreesanth used towel during the match as weather was humid in Mohali and he was using the towel to wipe out sweat from his palm which is usual for bowlers.

Khurshid said nowhere in the world, life ban has been imposed on a cricketer like this.

He said life ban was imposed on former Indian captain Mohammad Azharuddin, who was accused of being involve in a match-fixing scandal in 2000, but it was overturned later.

On November 8, 2012, the Andhra Pradesh High Court had termed the life ban imposed by the BCCI on Azharuddin as illegal and said it was unsustainable in law.

Similarly, Khurshid said life ban was imposed on former South African captain Hansie Cronje but he died in 2002 in a plane crash.

He also referred to the case of former Indian cricketer Ajay Sharma and said the life ban imposed on him for his alleged role in a match-fixing scandal was later lifted.

He also referred to the cases of ban imposed on several international cricketers, including Mohammad Amir, Salman Butt and Danish Kaneria, Herschelle Gibbs, Mohammad Ashraful and Lou Vincent for their alleged roles in fixing matches.

Khurshid said the recorded telephonic conversations did not show that the Mohali match was fixed in any way and evidence produced by police was not accepted by the trial court.

The top court has posted the matter for hearing on Thursday when counsel appearing for Committee of Administrators (CoA) of BCCI would advance his arguments.

Sreesanth had told the top court that he has offers to play English county matches and the life ban imposed on him by BCCI is "too harsh".

Delhi Police had arrested Sreesanth, along with cricketers Ajit Chandila and Ankeet Chavan, and others on charges of spot-fixing.

As many as 36 accused in the spot-fixing case, including Sreesanth, Chavan and Chandila, were discharged by a trial court here in July 2015.

The BCCI, however, had refused to alter its disciplinary decision of life ban on Sreesanth even after the trial court''s verdict.

A single-judge bench of the Kerala High Court had lifted the life ban imposed on Sreesanth by BCCI and had set aside all proceedings against him initiated by the board.

Later, a division bench of the high court had restored the ban on a petition filed by the BCCI against the single-judge bench''s order.

India Cricket Team Sreesanth Cricket
Get the latest updates on ICC T20 Worldcup 2022, check out the Schedule and Live Score. Like us on Facebook or follow us on Twitter for more sports updates. You can also download the NDTV Cricket app for Android or iOS.