Chris Gayle ready for the challenges of Test cricket

Chris Gayle has said he is ready to take on the challenges of Test cricket in the upcoming series against Bangladesh. 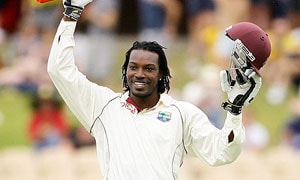 Opener Chris Gayle on Saturday said he looked forward to the challenges of five-day cricket against Bangladesh after playing a key role in West Indies's World Twenty20 victory last month.

The 33-year-old left-hander was one of the stars of West Indies' triumph in Sri Lanka but believed challenges were bigger in the first of two Tests which starts in Dhaka on Tuesday.

"I am happy to be a part of the World Twenty20, it feels good. It's a milestone," said Gayle of West Indies's first world title since winning back-to-back World Cup wins in 1975 and 1979.

"But we have to play well in the longer format of the game, that has been our major challenge. I have made the necessary adjustments from limited overs cricket to Tests and it will be a challenge."

The Test series will be only Gayle's second after a two-year self exile following a fall out with the West Indies cricket board over multiple issues.

He plundered 150 and 64 in the two wins over New Zealand earlier this year and is looking to give his team a promising start again.

"Well, obviously we have to get off to a good start and start the series well. It's a long series ahead of us, so hopefully we can get a good start. We didn't get a game before the Test so it's more important," said Gayle.

The West Indies were deprived of good practice ahead of the first Test when their three-day side game was called off due to wet ground in Savar, a town 40 kilometers from capital Dhaka.

West Indies also play five one-day and a Twenty20 international on the tour.

"Its always difficult to play Bangladesh in Bangladesh. But you know guys are good, even though we won the series last time we came here, but they have got good players. They have a captain who leads from the front," said Gayle.

"Sammy has been leading the team for a while. It's not an easy role, the captaincy, we senior players have helped him out and he has improved in the last couple of years. He is also doing well with the ball," said Gayle.

The second Test will be played in the new venue of Khulna from November 21.