Chris Gayle scored a 125-ball knock of 64 in the first innings against New Zealand in the first Test at Sabina Park. 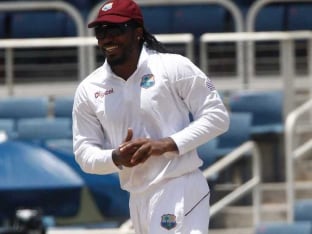 West Indian opener Chris Gayle, who marked his 100th Test appearance with his 35th Test half-century in the first innings, hopes to get a bigger score in the second to save his side in the first Test against New Zealand at Sabina Park in Kingston, Jamaica. (West Indies Suffer Nightmare in Gayle's 100th Test)

"Getting a nice start and getting a half-century was vital. From a team point of view, (I'm) disappointed that we are fielding again today (Tuesday).Â  I am looking forward to batting second and hopefully I can get a big one," Gayle said at a press conference. (Chris Gayle, He Also Plays Cricket!)

Gayle's knock of 64 from 125 deliveries included 11 fours but he had to endure a sticky period when Kiwi pacer Tim Southee troubled him with nagging line and length.

"I thought Southee bowled well all morning. I survived that first session, which was a vital one. I guess he deserved a wicket in his second spell, the way he bowled in the morning," Gayle admitted.

Despite Gayle's efforts and Shivnarine Chanderpaul's 63rd fifty on Day 3, New Zealand were in complete command with a 260-run first innings lead at stumps on Day 3.

"New Zealand are in the driver's seat now, so hopefully, tomorrow, whatever total is set, if we can bowl them out early, it's game on. We still have to be positive," Gayle added. The Kiwis are 14 for two in the second innings.

The burly Jamaican, however, refused to put the entire blame on them and said, "I am not disappointed in them because to be honest to get a start is always key and for someone who faces two balls and gets out, it's a little harsh to go hard at them."