It's not every day that an ordinary citizen gets to meet and chat with Sachin Tendulkar. But back in 1989, the God of Cricket wasn't the icon he is today. Of course, many had already heard about the child prodigy who would play for India one day. Months before he was finally picked to play for India, Salomi Pinto, then a freelance writer for a now-defunct magazine, met the master blaster at his residence. 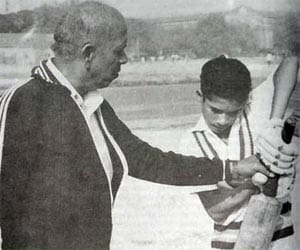 As Tendulkar gets set to take guard in the middle for one final time, Pinto recalls her first meeting with the legend.

When I heard the news that Sachin Tendulkar would be retiring post his 200th test match, my mind went back to that day 25 years ago, when I wrote for the magazine, Finesse, and interviewed Sachin at his modest dwelling in Ushakkal, in Bandra.

He was then a curly-haired 15-year-old, on the plumper side with rosy cheeks and shy.

At the time I went to his place only Sachin and his elder brother Ajit were at home. It was a sultry afternoon and I opted for tea when they asked me if I wanted a refreshing drink. One of the boys prepared the chai and the other quickly ran down to get a packet of wafers. Sadly, to be honest, I didn't realise I was interviewing a future national icon. So I really don't remember if it was Sachin who made me the tea, or did he get the wafers?

But I do remember the interview as if it was yesterday. Sachin told me he enjoyed studying at Shardashram Mandir and the class IX boy told me how he hated chemistry, his 'worst subject'.

Realising I was a teacher by profession, he narrated some of his woes of being a day scholar and playing his favourite game simultaneously. But he hastened to add that his teachers were very helpful.

"Actually, I spotted his batting talent when I saw him playing in our colony and referred him to my coach Ramakant Achrekar," chipped in the proud elder brother, Ajit. Tendulkar nodded in agreement and admitted he owed much to his brother. He said Ramakant sir was grooming him for matches at all levels and was happy that his protege had been chosen for the Indian under 19 team.

But the little boy sounded upset. "I was disillusioned when I did not get the best junior cricketer award earlier this year. However, Sunil Gavaskar sir allayed my fears with his letter that I have preserved," he told me before showing me Gavaskar's letter of encouragement that stated: "If you go through the annals of cricketers who did not win the country's best Junior Cricketer award, you will see one person's name missing, and he didn't do too badly for himself." Gavaskar was referring to himself!

Apparently Gavaskar had also advised Sachin to pursue his studies along with the game for there was no substitute for education. Sachin may not have followed his advice, but then he too did not fare too badly in international cricket either, did he?

After our chat, our photographer from the magazine arrived for a photoshoot. We went down to the society's compound where a young Sachin demonstrated his batting skills and we clicked several photographs of him in action. My photographer Rajesh asked, "Salome, do you want some photographs clicked with Sachin?" I hesitated a bit. I mean, it wasn't like this boy was a celebrity. We clicked one photograph together and that was it. How I regret not clicking a hundred more!

Two years later, when he was a national cricketer, I decided to make up for lost opportunities. The Indian team was playing against the West Indies at Wankhede stadium. I took my cousin to the stadium, scrawled a note to Sachin requesting him to come out and meet me.

And you know what? The man did come out, had a chat, showed me the thick gold chain and bracelet his parents had given him to celebrate his inclusion in the team...and I got a picture too.

Today as he retires from the game, he is a national hero, an icon for millions of sports lovers across the world. Kudos to you Sachin. Over to the Arjuns.