BBL: Matt Renshaw and Tom Banton combined for a spectacular but controversial catch to dismiss Matthew Wade, who was playing a fine knock. 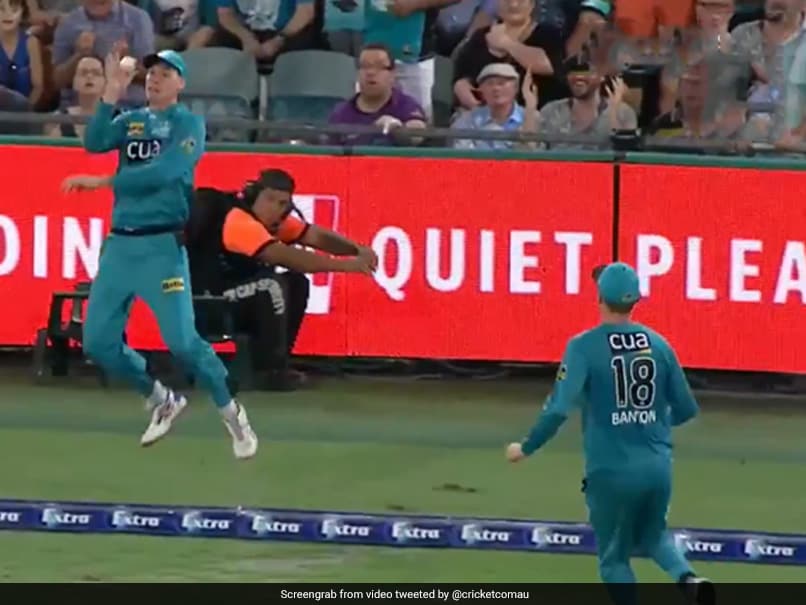 BBL: Matt Renshaw thought quickly on his feet to jump and push the ball back to Tom Banton.© Twitter

Matt Renshaw showed great presence of mind to help complete a relay catch at the wide long-on boundary and end a rampant Matthew Wade knock in the Big Bash League (BBL) match between Brisbane Heat and Hobart Hurricanes at the Gabba on Thursday. Wade, batting on 61 off 45 deliveries at the time, lofted Ben Cutting for what looked like his third six of the match in the penultimate delivery of Hobart's 15th over. Renshaw, running in from long-on, took the catch high above his head falling backwards. Knowing that he was going to cross the ropes and seeing Tom Banton run in for support, Renshaw instinctively tossed the ball in the air.

It was all pretty standard till this point, with several such catches seen especially since the onset of T20 cricket. But then it got interesting, as Renshaw did not manage to throw it to Banton, or for that matter, on the right side of the boundary rope.

Seeing the ball looping and following him beyond the line, Renshaw waited for it to come down before jumping and thrusting it to Banton while still mid-air, who held on to the ball.

The umpire initially did not give it out, but after the third umpire analysed the replays, Wade was told he had to go back to the pavilion.

Matthew Wade has to go after this spectacular effort from Matt Renshaw that will lead to plenty of debate about the Laws of Cricket! #BBL09 pic.twitter.com/wGEN8BtF5u

Many believe the original decision should have stayed, as Renshaw was outside the field of play when he pushed the ball back to Banton. However, Lord's, the official account of Marylebone Cricket Club - the custodians of the laws of cricket - tweeted a clarification saying that the catch was correctly given out.

"Under Law 19.5, the catch is deemed lawful. The key moment is when he first touches the ball, which is inside the boundary. He's airborne for his second contact," they tweeted.

"I've got no problem with where he left from. It's where he ends up. After he touches the ball he needs to end up back in the field of play," he tweeted, adding "If that's not the rule then the whole thing is farcical and the rule needs to change."

Dean Jones also retweeted Neesham, with a 'tick'emoji, backing up the all-rounder's point.

Hobart Hurricanes, who won the toss and chose to bat, were restricted to 126/9 in their 20 overs. Brisbane pulled off a clinical chase, despite losing five wickets, winning the match with 10 balls to go, thanks to a late assault by Ben Cutting.

Brisbane Heat Cricket
Get the latest updates on IPL Auction 2023 and check out  IPL 2023 and Live Cricket Score. Like us on Facebook or follow us on Twitter for more sports updates. You can also download the NDTV Cricket app for Android or iOS.