Bangladesh vs Sri Lanka 2nd Test Day 2: Karunaratne lived dangerously as Mahmudul Hasan dropped him on 37 at short-leg off Taijul Islam, moments after Bangladesh held back from reviewing an appeal which would have seen him out lbw off Ebadot Hossain. 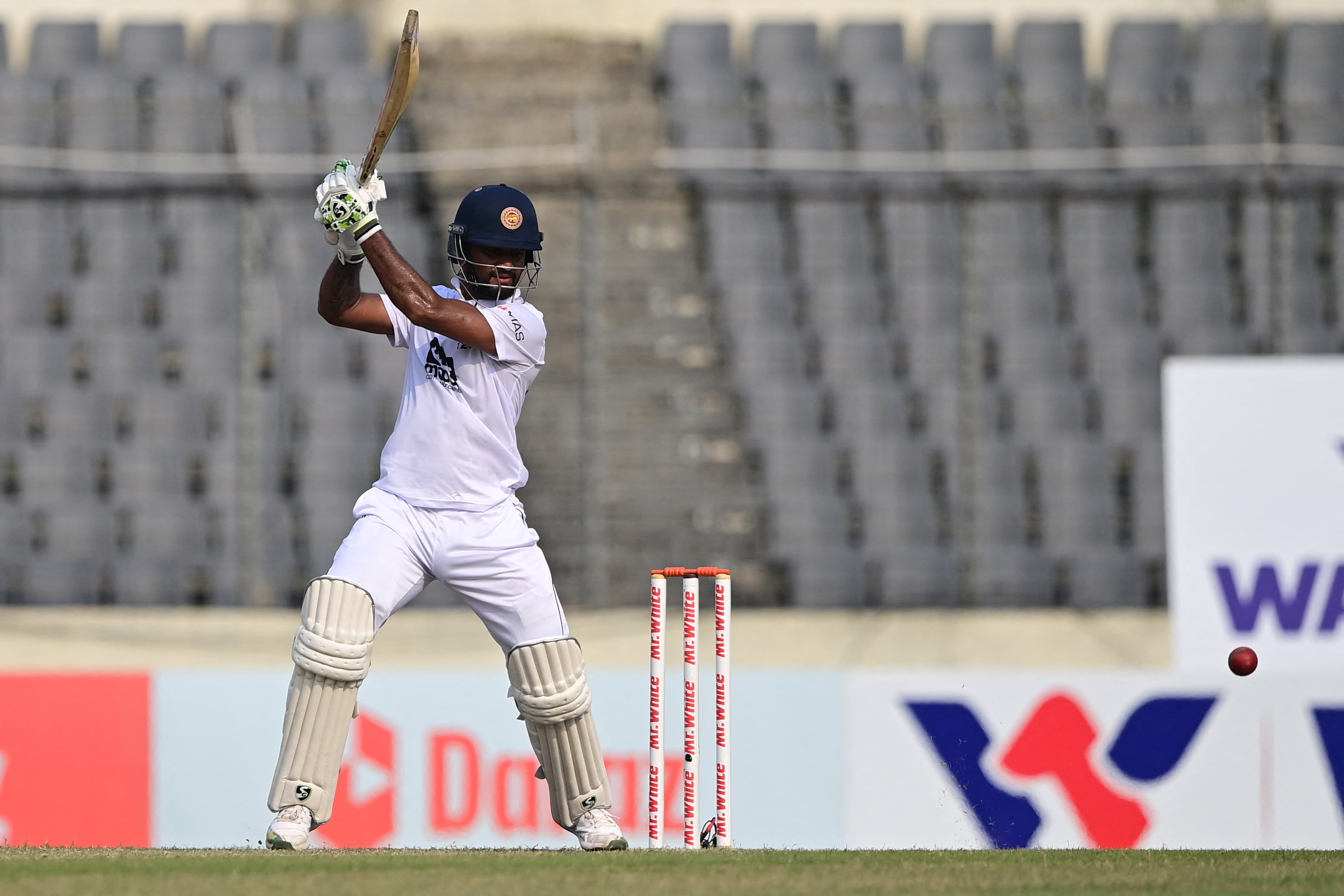 Openers Dimuth Karunaratne and Oshada Fernando each hit a fifty as Sri Lanka gave Bangladesh a fitting reply in the second Test in Dhaka on Tuesday. Both men took the crease after Kasun Rajitha claimed his maiden five-wicket haul, dispatching the hosts for 365, and helped guide the tourists to 143-2 at stumps on the second day. Oshada was out for 57 runs while Karunaratne remained unbeaten on 70, as Sri Lanka trail Bangladesh by 222 overnight.

Karunaratne lived dangerously as Mahmudul Hasan dropped him on 37 at short-leg off Taijul Islam, moments after Bangladesh held back from reviewing an appeal which would have seen him out lbw off Ebadot Hossain.

Ebadot soon got his reward for good bowling as he dismissed Oshada, who gave a catch to Najmul Hossain at slip.

Shakib Al Hasan removed Kusal Mendis for 11, with nightwatchman Rajitha to begin his spell at the crease in the morning.

Mushfiqur Rahim finished the Bangladesh innings unbeaten on 175 when last man Ebadot was run out for a duck shortly after lunch.

Ebadot's was the sixth duck of the Bangladesh innings, the joint highest in Test history.

Asitha Fernando's 4-93 was overshadowed by Rajitha's maiden five-for off 64 runs.

Rajitha struck twice in the eighth over of the day and broke Liton Das's 272-run sixth-wicket stand with Mushfiqur, after the pair rescued Bangladesh from a perilous 24-5 on the first morning.

Kusal Mendis, who had been taken to hospital on the opening day under extreme heat, took the catch at second slip as Liton departed after hitting 16 fours and a six in his 246-ball innings.

Rajitha took his fifth wicket three balls later, forcing Mosaddek Hossain to edge behind for a duck in his first Test in more than two years.

Mushfiqur, who started the day on 115, took charge and played some extravagant shots, including reverse and conventional sweeps off Ramesh Mendis for successive boundaries.

It was the fifth time Mushfiqur had reached the 150-run mark in Tests and he had gone on to make three double centuries.

He added 49 runs with Taijul for the eighth wicket before Sri Lanka struck again as Fernando bagged his third victim of the innings with Khaled Ahmed soon becoming the fourth without scoring.

Mushfiqur and Ebadot then survived nearly six overs in an extended morning session.

Meanwhile the Sri Lanka cricket board said it was flying home batsman Kamil Mishara -- who has not played in either Test -- for an alleged breach of discipline.

An official source in Sri Lanka told AFP that Mishara had "entertained a visitor" in his hotel room, violating the rules of conduct for players.

Dimuth Karunaratne Cricket
Get the latest updates on ICC T20 Worldcup 2022, check out the Schedule and Live Score. Like us on Facebook or follow us on Twitter for more sports updates. You can also download the NDTV Cricket app for Android or iOS.