Sri Lanka captain Dinesh Chandimal was charged for breaching Level 2.2.9 of the ICC Code of Conduct, which relates to changing the condition of the ball. 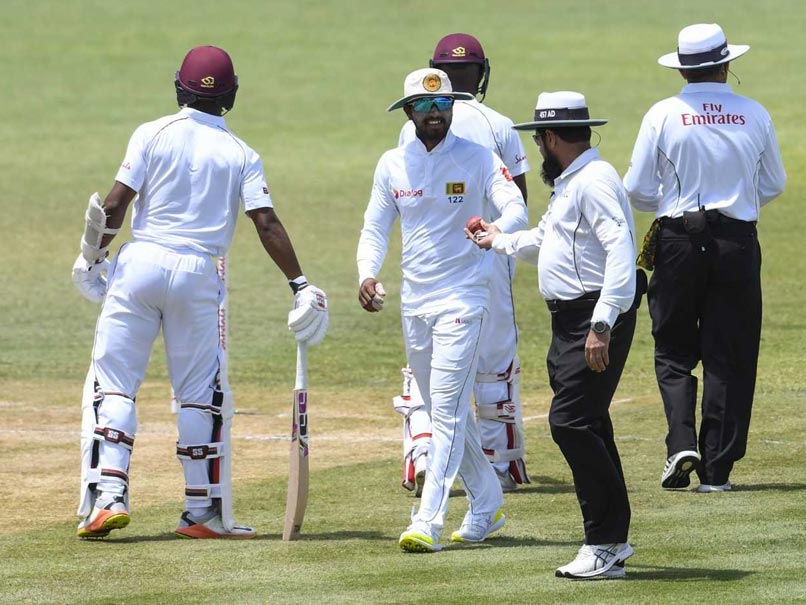 Dinesh Chandimal has been charged with changing the condition of the ball by ICC.© AFP

Sri Lanka captain Dinesh Chandimal was on Sunday charged for breaching Level 2.2.9 of the ICC Code of Conduct, which relates to changing the condition of the ball. At the start of play on Day 3 of the 2nd Test between West Indies and Sri Lanka in St. Lucia, the visitors led by skipper Chandimal had refused to take the field following a decision by umpires Aleem Dar and Ian Gould to charge the them with altering the state of the ball during the latter stages of the second day's play. Play only resumed after a two-hour delay with the tourists being assessed five penalty runs.

It appeared for some time that the day's play at least -- and possibly the rest of the match -- might be in doubt.

However, it was after these deliberations that the Sri Lankans agreed to the change of ball and to continue playing.

But after initially appearing to be prepared to resume the match, the Sri Lankans hesitated even as they were making their way out to the middle, resulting in further discussions before they were finally persuaded to get the day's play underway two hours later than scheduled.

The ICC warned at the time that they might take punitive action.

"If there are any, Code of Conduct charges will follow as per usual at close of play," tweeted the ICC.

In a statement on Saturday, Sri Lanka Cricket (SLC) solidly backed their players.

"The team management has informed us that Sri Lankan players have not engaged in any wrongdoing," said SLC in a statement, but added: "SLC advised the team to take the field to ensure the continuity of the match and wish to commend the decision taken by the team 'under protest' to ensure the upholding of the spirit of the game."

"I think that everyone is a bit jumpy and walking on eggshells, especially after what happened in South Africa. So maybe Gould was just being over-cautious.

"They say something, maybe, that meant the ball needed to be changed; maybe it was the shape. The Sri Lankans would have taken offence at that and would have made their case."

In March this year, Australia were caught tampering with the ball in the third Test against South Africa in Cape Town.

Steve Smith and David Warner were stripped of the captaincy and vice-captaincy respectively and banned from playing international cricket for 12 months.

Opening batsman Cameron Bancroft, the player caught on camera applying sandpaper to the ball, was banned for nine months.

The controversy also rekindled memories of 2006 when Pakistan were penalised five runs for ball tampering in the fourth Test against England at The Oval.

That match was the only Test in the game's history to be forfeited after Pakistan refused to return to the field.

When play eventually resumed on Saturday, Sri Lanka fought well to limit the West Indies first-innings lead to 47 runs as the hosts, who started the day at 118 for two, lost their last six wickets for 59 runs to be dismissed in the final session for 300.

Dinesh Chandimal Cricket
Get the latest updates on India vs South Africa and check out  Schedule, Results and Live Score. Like us on Facebook or follow us on Twitter for more sports updates. You can also download the NDTV Cricket app for Android or iOS.