Steve Smith scored a half-century as Australia beat Sri Lanka by nine wickets in the second T20I to win the series. But he got a life when the Sri Lankans forgot the rules. 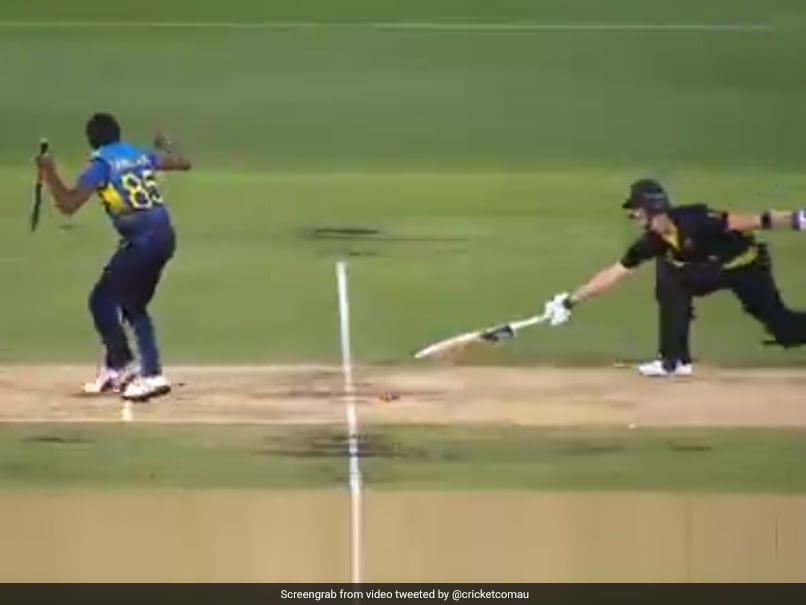 After a marvellous Ashes series in England, Steve Smith marked the start of the Australian summer with a classy half-century, helping Australia to a comfortable nine-wicket win over Sri Lanka in the second T20I at the Gabba in Brisbane. He put on an unbeaten 117-run stand with David Warner as Australia comfortably chased down the target set by the visitors. However, Smith was fortunate to not lose his wicket as Sri Lanka's Lakshan Sandakan had him all but dismissed, barring one small mistake.

In the 13th over, with Australia just six runs away from a series-clinching win, Warner tried to smash Sandakan down the ground. The southpaw opener, however, hit the ball too straight, sending it crashing into the stumps at the non-striker's end.

Steve Smith had already started off for a run and was sent back by Warner. Sandakan was quick to pick up the ball, and with the bails already dislodged, he uprooted a stump with Smith still out of the crease.

Sandakan had a golden opportunity to run out Smith! #AUSvSL pic.twitter.com/E7AsOwEjSJ

Sandakan thought he had his man, but he had forgotten one small bit. The rules dictate that the ball must come in contact with the stump that is being uprooted in such a case, but Smith had made his way back to the crease before the spinner could bring both his hands together.

The match was all but over by the time the incident happened anyway, but it did bring about some laughs on the field. Ironically, Sandakan lost his wicket in the exact same fashion in Sri Lanka's innings, with Pat Cummins taking a stump off the ground with Sandakan short of the crease. The only difference being Cummins had the ball in the same hand that he uprooted the stumps with.

Australia's win means they have an unassailable 2-0 lead in the three-match series. They had routed Sri Lanka in the first match as well, with David Warner's maiden T20I ton powering Australia to a 134-run victory.