Pat Cummins claimed the wicket of Mohammed Rizwan during the first Australia-Pakistan Test but replays showed what looked like a no-ball that was missed by the TV umpire. 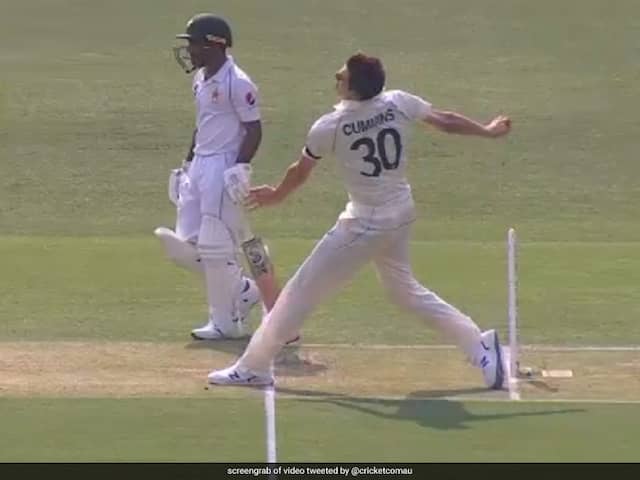 Pat Cummins got a crucial breakthrough for Australia on the first day of their Test match against Pakistan at the Gabba when he got the wicket of Mohammad Rizwan. But controversy erupted as replays suggested that he had overstepped while bowling the delivery and the third umpire did not overturn the out decision against Rizwan. Fans could not believe that despite checking the replays, the third umpire, Michael Gough, decided it was not a no-ball, although it looked like Cummins' foot was on the line and not behind it.

Watch the video of the dismissal here:

It doesn't come any closer than that!

"Definitely a no ball," wrote a fan.

"The technology and tv screen spouse to bring right decision. Michael Gough should be fined no excuse," a user tweeted. "And suspended until can reprove his ability or even be removed indefinitely," another user added.

"Clearly.Imagine the outcry if it were a Pakistan bowler getting Smith out like that?" another user tweeted.

Even Australian legends Adam Gilchrist and Brett Lee concurred that there was nothing behind the line.

Even though he's a fast bowler, @BrettLee_58 says nothing behind the line. #AUSvPAK @FoxCricket pic.twitter.com/wCcF21KN4N

Definitely a no ball.

The technology and tv screen spouse to bring right decision. Michael Gough should be fined no excuse. #PAKvsAUS

NOTHING behind the line. a clear NO BALL !

How do they get that wrong? Lol

Smith to the 3rd umpire: pic.twitter.com/1ZLd1yM4Yi

The controversial dismissal came at a crucial juncture. After a wicket-less first session, Pakistan lost a flurry of wickets after Lunch. With Asad Shafiq holding the fort at the other end, Rizwan decided to counter-attack, making 37 off 34 deliveries.

His departure meant Shafiq was left to fend off the Australian attack along with the tail, and despite his stoic resistance, Pakistan eventually folded for 240.

Pat Cummins Cricket
Get the latest Cricket news, check out the India cricket schedule, Cricket live score . Like us on Facebook or follow us on Twitter for more sports updates. You can also download the NDTV Cricket app for Android or iOS.