Australia vs Pakistan: Australia finished day's play at 302/1, with David Warner and Marnus Labuscahgne unbeaten on 166 and 126 respectively. 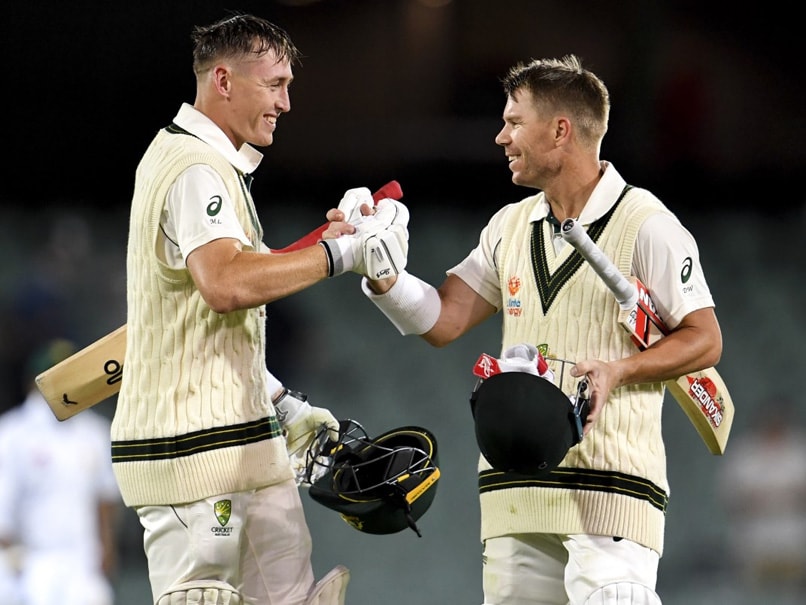 David Warner and Marnus Labuschagne were unbeaten on 166 and 126 respectively.© AFP

David Warner and Marnus Labuschagne both plundered back-to-back centuries as Australia stamped their authority on the opening day of the day-night second Test in Adelaide Friday. At the close on a rain-interrupted day, the home team were a dominant 302/ 1with the pair building an ominous 294-run partnership, leaving Pakistan with a huge battle to stay in touch.

Warner was not out 166 and Labuschagne unbeaten on 126, following on from their 154 and 185 respectively in the first Test at Brisbane. Their Adelaide partnership was the highest ever in a day-night Test.

"It's a bit surreal at the moment. It was just amazing to be out there with Davey and to just put on a really big partnerhsip," said Labuschagne. "Really happy. We were running hard, I love the intensity of the crease."

Warner paid tribute to the maturity of his partner, who is playing in only his 11th Test.

"Credit to Marnus for the way he came out and took the bowlers on again, he picked up where he left off at the Gabba," he said.

"We're just  thrilled to get through that tonight and want to come out tomorrow and put some more runs on the board."

Pakistan need to win to square the two-match series. The odds were heavily stacked against them before the game began, having lost 13 consecutive Tests in Australia, and their chances are even slimmer now.

Over the years, taking wickets in Australia has been a challenge for Pakistan and they shuffled their bowling attack for the pink-ball Test in a bid to make the most of the conditions.

Veteran seamer Mohammad Abbas, who tormented Australia when he took 17 wickets in two Tests in the UAE last October, returned in place of Imran Khan while 16-year-old pace sensation Naseem Shah was rested.

That handed a debut to 19-year-old medium-fast right-armer Muhammad Musa, but, like in the first Test at Brisbane, none of them could tame Warner and Labuschagne, with the ball hardly doing anything under the lights to trouble them.

After Australian skipper Tim Paine won the toss and chose to bat, Pakistan had a flicker of hope when Joe Burns was out for four, but a stubborn Warner and Labuschagne dug in and they went to tea at 70 for one.

The players were forced to remain in the dressing room for an extra two hours from the scheduled resumption due to persistent light drizzle, but when they returned Warner quickly brought up his 31st half-century.

The opener got an inside edge for two runs, with his 50 coming courtesy of four careless overthrows -- the first time in five day-night Tests he has passed the mark.

He continued to pick off runs, reaching his 23rd Test century with a single off spinner Yasir Shah in a near faultless innings that included 12 fours.

It has been a big turnaround for the former Australian vice-captain, who managed just 95 runs in 10 innings during this year's Ashes series in England.

At the other end the impressive Labuschagne quietly went about his business, notching his sixth 50 in his 11th Test with a boundary off Musa.

The South African-born right-hander showed solid form during the Ashes, benefitting from a stint with English county side Glamorgan, but he has really come of age against Pakistan.

The 25-year-old bagged his second Test ton with a two off Yasir, punching the air in joy after reaching three figures from 169 balls with 14 fours.

Earlier, on an overcast afternoon and with the floodlights on from the first ball, Shaheen Afridi, Pakistan's standout bowler, bagged the wicket of Burns.

With the ball moving off the seam, he got an edge to Mohammad Rizwan behind the stumps and was out for four, with that breakthrough proving to be the only ray of sunshine for the visitors.

Adelaide Oval, Adelaide Cricket
Get the latest updates on ICC T20 Worldcup 2022, check out the Schedule and Live Score. Like us on Facebook or follow us on Twitter for more sports updates. You can also download the NDTV Cricket app for Android or iOS.