Steve Smith was in the thick of things, having an argument with the umpire, getting mocked by rival fans, as well as scoring another unbeaten half-century. 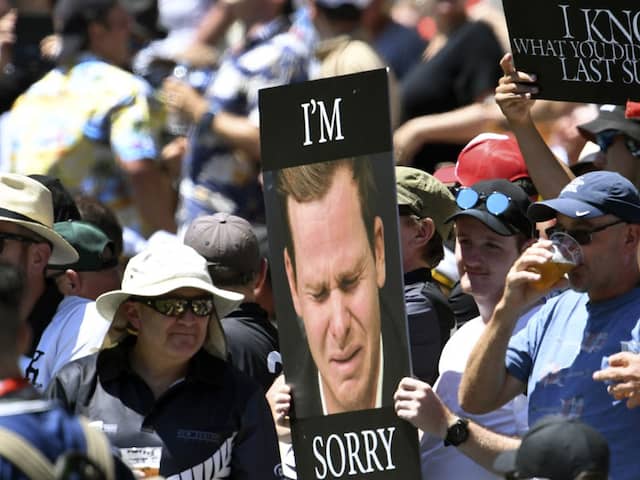 Steve Smith might have overcome the ball-tampering scandal to make a brilliant return to Test cricket, but the New Zealand fans did not miss their chance to rub salt into the wound. At the Melbourne Cricket Ground (MCG) on Thursday, a New Zealand fan mocked Steve Smith with "I know what you did last summer" placard. Another New Zealand fan was seen carrying a "I'm Sorry" placard with a famous image of Smith crying during Day 1 of the second Test. However, unperturbed by the mocking, Steve Smith displayed his determination to remain unbeaten on 77 runs at stumps on Day 1.

Smith, 30, brought up his 28th Test half-century off 103 balls -- his first in four Tests. In the process, he surpassed Greg Chappell (7,110 runs) to become Australia's 10th highest run-scorer in Test cricket, with David Boon's 7,422 his next target.

Smith is currently second in the Test rankings with 911 points. He holds an impressive average of 63.14 in the longest format of the game with the help of 26 centuries and 28 half-centuries.

Australia currently lead the three-match Test series against New Zealand 1-0. The third Test will be played at the Sydney Cricket Ground from January 3, 2020.

Australia will be touring India for a three-match One-Day International (ODI) series, starting from January 14, 2020, at the Wankhede Stadium in Mumbai.

Steven Smith Cricket
Get the latest updates on IPL 2020, check out the IPL Schedule for 2020 and Indian Premier League (IPL) Cricket live score . Like us on Facebook or follow us on Twitter for more sports updates. You can also download the NDTV Cricket app for Android or iOS.