Sakshi Dhoni has been quite regular at Chennai Super Kings' matches since her marriage to Chennai and India captain MS Dhoni. During the 2015 IPL finals, Sakshi revealed at tattoo with Dhoni's nickname - Mahi. 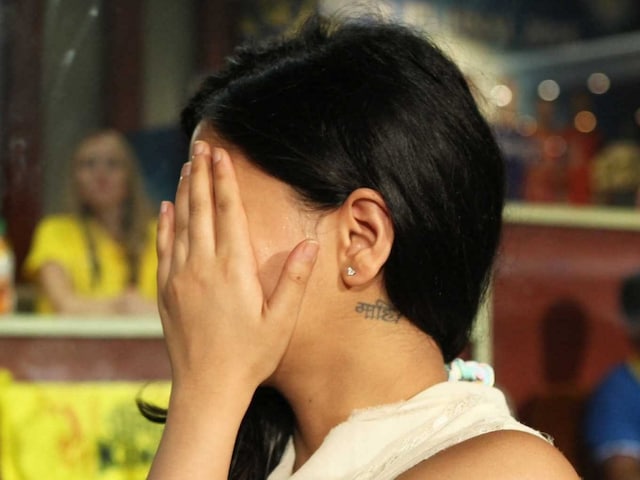 Always ready to smile for the cameras, Sakshi Dhoni was not too obliging this Sunday when Chennai Super Kings lost the 2015 IPL final to Mumbai Indians at the Eden Gardens. Chennai captain MS Dhoni's wife turned away from the cameras - possibly as Chennai were losing - but in the process, revealed a tattoo of her husband's name. (IPL 2015 complete coverage | Stats | Photos)

An ardent fan of cricket, Sakshi has been quite regular at CSK's matches since her marriage to Dhoni in 2010. The couple became first-time parents earlier this year to daughter Ziva who has been giving her mother company at IPL matches. On Sunday, the mother and daughter were together to cheer for CSK but Sakshi eventually was found avoiding the shutterbugs. As she covered her face, she inadvertently revealed a tattoo which read Mahi - Dhoni's nickname - in Hindi. (Dhoni critical of Eden wicket after IPL 2015 loss)

Several high-profile celebrity couples around the world have previously inked themselves in an expression of love and commitment. As for Sakshi though, she will get to spend quality time with her husband who has had a hectic few months which saw him play the ICC World Cup and the IPL immediately after. (Rohit Sharma to Yuvraj Singh, the hits and misses of IPL 2015)

Comments
Topics mentioned in this article
MS Dhoni Chennai Super Kings Cricket
Get the latest Cricket news, check out the India cricket schedule, Cricket live score . Like us on Facebook or follow us on Twitter for more sports updates. You can also download the NDTV Cricket app for Android or iOS.