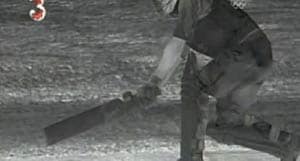 The decision-review device, which uses heat sensors and infrared cameras to detect contact between the ball, bat and pads, will now not feature in the showpiece five-Test series, beginning at Brisbane's Gabba ground on November 21.

"It's their decision and that's what's been communicated to us. As far as I'm concerned, it is final," Brennan said.

"We're just moving on with things. Channel Nine have got a new deal with Cricket Australia which I know has cost them a lot more money. I gather there had to be some restructuring of costs."

The development leaves the ball-tracking component, Eagle Eye, audio evidence picked up by stump microphones and slow-motion replays as the remaining tools at the disposal of the third official for decision reviews in the Ashes.

Trust in the Hot Spot technology was severely tested during the first leg of the back-to-back Ashes series won 3-0 by England in July-August.

While match umpires were criticised for poor decisions, Hot Spot was at the centre of a succession of contentious verdicts involving fine edges.

The cost of Hot Spot -- the company charges Aus$10,000 ($9,440) a day for the four-camera system Channel Nine has used, which totals Aus$250,000 ($236,000) for the Test series -- is a key reason behind the broadcaster cutting ties but its poor performance in England is also understood to be a factor, the media group said.

A Cricket Australia spokesman said of the reports: "We don't think it's appropriate to comment on discussions between Nine and one of its partners."

Comments
Topics mentioned in this article
Cricket Australia Cricket Team England Cricket Team South Africa Cricket Team Pakistan Cricket Team
Get the latest updates on ICC T20 Worldcup 2022 and CWG 2022 check out the Schedule, Live Score and Medals Tally. Like us on Facebook or follow us on Twitter for more sports updates. You can also download the NDTV Cricket app for Android or iOS.