With four overs left Sri Lanka needed 52 to win but an undaunted Asela Gunaratne tore into the Australian attack, slamming Moises Henriques for three consecutive sixes and a four and then taking two fours and a six off Andrew Tye's final over. 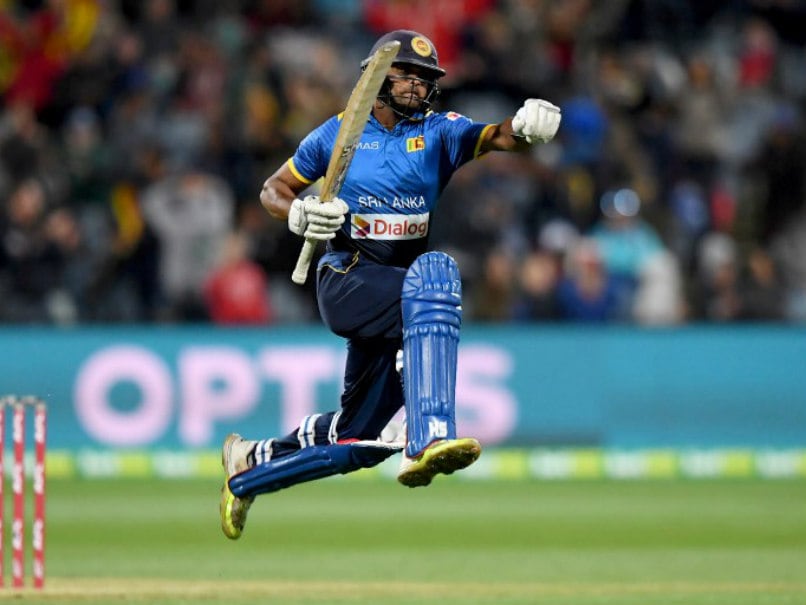 Asela Gunaratne smashed 84 off 46 balls to lead Sri Lanka to a last-ball win over Australia.© AFP

Asela Gunaratne slammed a pulse-racing 84 to power Sri Lanka to a last-ball victory against Australia on Sunday, clinching their Twenty20 series. Gunaratne pounded the Australian bowlers with five sixes and six fours off 46 balls to get the Sri Lankans home by two wickets to scenes of wild jubilation at Geelong. It was the second time the Sri Lankans had denied Australia victory off the last ball, with Chamara Kapugedera hammering a boundary to win Friday's opening match in Melbourne. The Sri Lankans remain unbeaten in five T20Is in Australia, but this was their finest come-from-behind performance in front of their excited expatriate fans.

With four overs left Sri Lanka needed 52 to win but an undaunted Gunaratne tore into the Australian attack, slamming Moises Henriques for three consecutive sixes and a four and then taking two fours and a six off Andrew Tye's final over.

The bashful Gunaratne only offered a few words -- "It is a very happy moment" -- before dashing away from his post-match man-of-the-match presentation.

The series may be decided but there is one match to play, in Adelaide on Wednesday, with the Sri Lankans eyeing a clean sweep.

The Australians could not believe what they were seeing after having the tourists struggling at 40 for five in the fifth over and going nowhere fast.

But Gunaratne, who bludgeoned 52 off 37 balls in the first game in Melbourne, hit out spectacularly while Kapugedera chipped in with a run-a-ball 32.

Henriques earlier hit his first T20 international half-century to steer Australia to 173 after they were sent in to bat by Sri Lanka.

The big-hitting all-rounder was left unbeaten on 56 from 37 balls when the last wicket fell off the final ball.

Veteran Nuwan Kulasekara captured three wickets in the final over to keep the dangerous Henriques away from the strike and restrict the Australia score. He finished with four for 31 from four overs.

Australia began strongly, with Michael Klinger slamming 43 off 37 balls and the promoted Ben Dunk 32 off only 14 balls.

Dilshan Munaweera's one over cost 22 runs, with Dunk clouting him for three sixes and a four.

Sri Lanka did not help their cause with a few dropped catches. Kapugedera put down Henriques when he was on 19.

But Milinda Siriwardana took a superb diving catch at long-off to dismiss Ashton Turner for seven.

Australia made two changes, with fast bowler Jhye Richardson making his debut and Dunk called in to bolster the top order.

Fast bowler Billy Stanlake was dropped along with the leg-spinner Adam Zampa.

Sri Lanka made one change to the team that won in Melbourne on Friday, bringing in batsman Kusal Mendis at the expense of left-arm wrist-spinner Lakshan Sandakan.

Comments
Topics mentioned in this article
Australia Cricket Team Sri Lanka Cricket Team Asela Gunaratne Chamara Kapugedera Andrew Tye Moises Henriques Cricket
Get the latest updates on Fifa Worldcup 2022 and check out  Fifa World Cup Schedule, Stats and Live Cricket Score. Like us on Facebook or follow us on Twitter for more sports updates. You can also download the NDTV Cricket app for Android or iOS.