Ireland depended on a 81-run second-wicket stand between Paul Stirling and Andy Balbirnie to achieve their target as the series ended at 2-2. 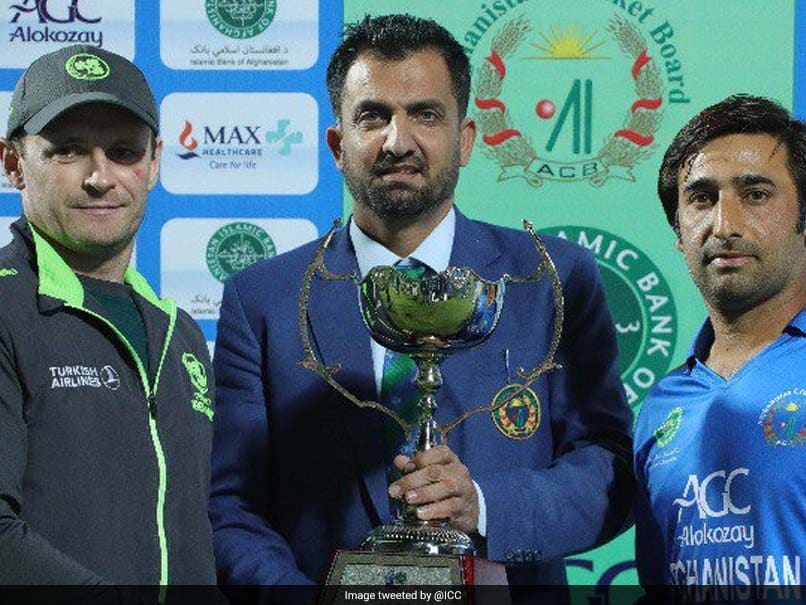 Paul Stirling top-scored for Ireland with 70 runs in the fifth ODI.© Twitter

Half-centuries by Paul Stirling and Andy Balbirnie helped Ireland to a five-wicket series-levelling win over Afghanistan in the fifth and final One-day International on Sunday. Chasing a modest 217, Ireland depended on a 81-run second-wicket stand between Stirling and Balbirnie to achieve their target in 47.2 overs as the series ended at 2-2 in Dehradun. The second ODI was washed out. Left-arm spinner Geroge Dockrell led a disciplined bowling attack to set up the win as Ireland kept down Afghanistan to 216 for six after being put into bat first.

Stirling top-scored with 70 and Balbirnie made a patient 68 to drive a tricky chase for Ireland in a hard-fought series that comes after their whitewash in the two Twenty20 matches.

"All the batters are aware how good their (Afghanistan) spinners are," said Balbirnie, who was named man of the series for his 215 runs in the series.

"I just kind of knew my game, we watched a lot of their footage."

Ireland had a little stutter in the end with Balbirnie bowled by teenage spinner Mujeeb Ur Rahman and George Dockrell out for a first-ball duck off Mohammad Nabi.

Earlier Afghanistan skipper Asghar Afghan struck a gritty 82 to bring Afghanistan respect after they were left reeling at 50 for four.

Afghan, who made 75 and 54 in the previous two matches, put on 76 runs with veteran batsman Nabi, who made 40, to revive the innings.

He then held strong with Rashid at the other end to manage 65 runs for the seventh wicket before retiring hurt. His 111-ball stay was laced with six fours and two sixes.

"It was a good series. We are targeting the World Cup, so we made changes in every match," Afghan said.

"Top order's a concern, (but) the Test match should offer an opportunity."

The two teams will play a one-off Test starting March 15 in Dehradun.

Afghanistan Cricket Afghanistan vs Ireland, 5th ODI Rashid Khan
Get the latest updates on ICC T20 Worldcup 2022 and CWG 2022 check out the Schedule, Live Score and Medals Tally. Like us on Facebook or follow us on Twitter for more sports updates. You can also download the NDTV Cricket app for Android or iOS.